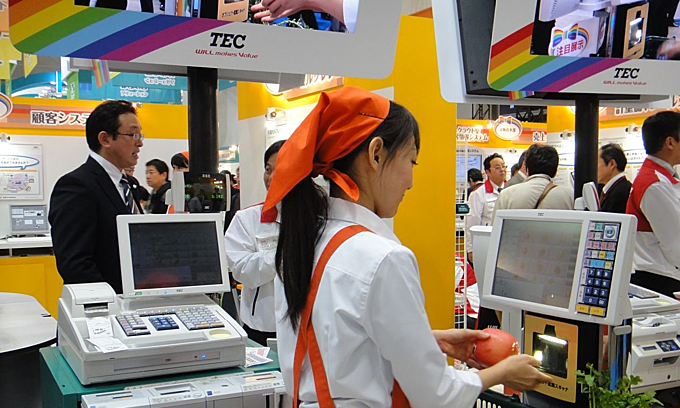 A Vietnamese student working in a supermarket in Japan. Photo acquired by VnExpress.

It was 2 a.m. when Nghia finally left the bar next to the highway where he worked part-time. Standing next to the roadside and watching the trucks rush by, Nghia wished he was brave enough to take just one more step and end his life.

It was not the first time the 23-year-old Hanoi native had contemplated suicide.

Le Trong Nghia had arrived in Fukuoka, southern Japan, in 2015, to study a self-funded degree in economics. Everything was fine until the third year. Despite the family’s financial support, Nghia had to do extra work to make ends meet even as his studies kept getting more and more difficult.

“The pub is located in a red light district, and I go home even later than the ‘working girls’ around here,” he said.

Nghia sleeps for four hours every day and has nightmares of the pub owner taking umbrage. Sleep deprived, Nghia is always exhausted every time he attends lectures, and as he commutes in crowded buses, the thought of ending his life keeps creeping up.

After four months working at the pub, Nghia switched to working as a bartender at another bar, taking on two 7-hour shifts a week. The new job requires him to converse with customers, but Nghia is confused often because his Japanese is not so fluent.

“The most frightening thing is that the boss always stands behind me observing and giving orders. If he sees something that’s not okay, he’ll come over and say: ‘Use your brains.'”

From a gregarious, enthusiastic student, Nghia has become a recluse, feeling trapped and living like a robot. He failed three subjects in his last year and has resorting to smoking. He has tattooed half his back and allowed himself to be beaten to a pulp at kickboxing practice just to relieve his stress.

Several times, as the train approaches the station, the thought of ending it all comes to mind.

Nghia is one of many Vietnamese students in Japan who are crumbling under multiple pressures, financial and psychological.

Nguyen Lan Chi, born in 1995, moved to Chiba City, 40 km from Tokyo, after dropping out of university in Hanoi. Being good at foreign languages, and believing that Japan was an easy place to get well paying part-time jobs, Chi was confident she could manage without bothering her parents.

Only after she arrived did she realize everything was much more difficult than she thought.

In the first two months, Chi received VND5 million ($214.86) from her family to support her. Of course, that was not enough. To get by, Chi worked two jobs, one at a pub and one at a small supermarket for a total of 45 hours per week, usually from late afternoon till late night. Sometimes, exhausted, she would like awake, staring at the ceiling and asking herself why she’d came to Japan in the first place.

After two years of language studies, Chi shifted to an art school, paying 1.3 million yen ($12,019) per year. As financial pressures increased, Chi’s day began at 6 a.m. and ended at 1-2 a.m. “On the way home from work, I often thought it would be good if I were to get hit by a truck.”

Having no time to practice drawing, Chi found herself not progressing alongside her classmates. She often missed classes because she overslept, and her attendance was so poor the school had to invite her in to have a talk.

Chi estimates that 99 percent of her friends in Japan work part-time jobs to pay their living expenses, many of whom end up being too busy for school.

“Any student who comes to Japan will have to find a way to make extra money. Some people take as many as three jobs, working 60 hours a week,” said Tran Hoai Phong, 23, a fashion student who has spent 3 years in Tokyo.

Although not as burnt out as Nghia and Chi, Phong is still fatigued from having to ensure she attends all her classes while spending 23 hours a week selling clothes. Phong estimates that families have to provide around VND400-500 million ($17,189 – $21,486) per year for students to be able to concentrate on studying.

A Japanese study center in Hanoi recently revealed that for every 10 families sending their children to Japan, up to 6 families have limited financial resources, forcing students from to work part-time jobs.

In a Nikkei Asian Review article in 2017, Hiroyuki Ogawa, managing director of the Japan-Vietnam Association, said that the number of Vietnamese part-time workers in Japan was increasing rapidly. Many work as kitchen assistants or waiters because such jobs do not require high fluency in Japanese.

“Many parents who see their children sending money back think that it is easy to earn money in Japan, without realizing what the kids have to give in exchange.

“The fault also lies with some dishonest overseas study agencies, who paint a rose-tinted picture of life in Japan,” said Do Mai Chi, an education consultant in Hanoi.

Chi said the cost of studying in Japan, including tuition and living expenses, is about VND400 million ($17,189) a year. Without family support, many international students have little choice but to work informally beyond their legal maximum part-time hours. If found out, these students will have to return home.

“Often students who work 28 hours a week in accordance with Japanese regulations earn about 110,000 yen ($1,017). In Vietnam, this amount is quite large, but in Japan it is only enough for one person,” said Pham Nguyet Quan, a doctor who has lived in Osaka for 4 years.

According to the Japan Student Services Organization, in 2018, there were 72,354 Vietnamese students studying in Japan, up 10,600 from the previous year.

Earlier this year, Nghia graduated from university and returned to Vietnam.

He said he was lucky to have realized the crisis he was going through. Instead of trying to cling on to work at the bar, Nghia quit his job and lived off his friends for a while to focus on recovering his health.

Two weeks later, he was introduced by an acquaintance for a position at a hospital, washing dishes. Although he earned less than before, the new job liberated him from undue stress.

Currently, in addition to teaching Japanese, Nghia works as a volunteer for a mental health organization.

“Everything has its price, studying abroad is not a walk in the park. Besides finance, you have to prepare your mentality as well, equip yourself with soft skills and ascertain whether you are going overseas to study or to work. If you are there to study, you must stop working as soon as you see your grades being affected.”

Meanwhile, Chi has stayed on in Japan and continues to struggle. She does not dare share her difficulties with her family for fear of worrying them. She understands she has to make changes, but is not sure what she has to do.

“If I work, I don’t have time to study, and if I just study, I don’t have money to live. It’s a vicious cycle. I wish my family had a lot of money to save me the worry.

“Life in Japan is only suitable for those with good financial strength or very strong will.”