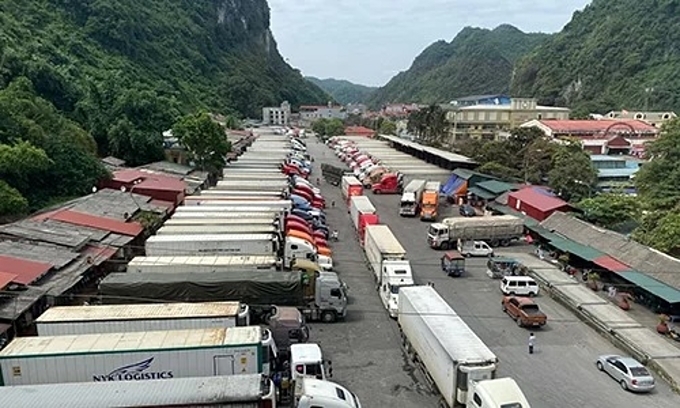 Hundreds of containers stuck at the Tan Thanh border gate on October 19, 2019. Photo by VnExpress/K.M.

Hundreds of dragon fruit containers are stuck at the border in northern Lang Son Province with Chinese customs taking longer to clear them.

As of Saturday morning, about 500 containers, mostly dragon fruit were still waiting for their turn, forming a nearly 5-kilometer (3-mile) queue at the Tan Thanh border gate.

It has therefore become the destination for large amounts of dragon fruit containers over the past week as the fruit enters harvesting season. Up to 200 trucks have been arriving each day.

China, meanwhile, has just started applying a tighter inspection policy for vehicles and imported goods, extending the time it takes for each truck to pass through the border gate by 5-7 minutes, resulting in congestion.

“The Chinese Customs has cooperated with Lang Son authorities to create the most favorable conditions for goods clearance. Currently the customs clearance is much improved,” Vuong said. From just 100 trucks a few days ago, they were processing 200-250 now, he added.

He recommended that agricultural product exporters should keep themselves up-to-date with the customs clearance situation at the border gate and avoid sending too much goods as this would extend waiting time, increase costs and reduce produce quality.

Exporters must also correctly declare the types of goods they export, especially for the nine agricultural products that Vietnam has signed with agreement with China, so that their vehicles won’t be detained and result in a lengthy and complex handling process, Vuong said.

Deputy Minister of Agriculture and Rural Development Phung Duc Tien met with Lang Son authorities Saturday and asked them to work with Chinese counterparts to ensure quality as well as timely clearance of goods.

“The province has reported that it’s working very actively with the other side. Therefore, I believe the congestion at Tan Thanh border gate would be resolved soon,” Tien said.

In late August, a similar incident had occurred at Lang Son’s Tan Thanh and Huu Nghi border gates with goods, mainly fruits and other agricultural products, piling up at the border.

This incident was precipitated by the Chinese side granting exporters a new type of certificate of origin, which was not accepted by Vietnamese customs authorities. This conflict forced exporters’ goods to remain at the border gate until the paperwork issue could be resolved.

In the first eight months of this year, Vietnam exported $1.8 billion worth of fruits and vegetables to China, down 10.1 percent year-on-year, according to the Ministry of Agriculture and Rural Development.

China was the biggest importer of Vietnamese fruits and vegetables in the 8-month period, accounting for 73.6 percent, but this was down from 74.9 percent last year.