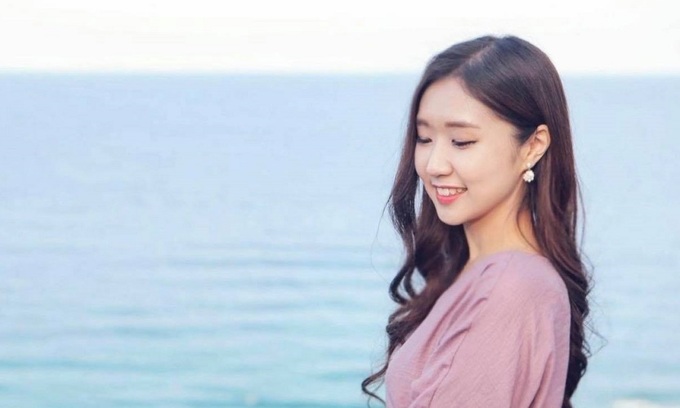 Jin Ju can speak and sing Vietnamese fluently after a year of living in Vietnam. Photo acquired by VnExpress.

The reception was positive, with most people praising her for pronouncing and singing Vietnamese like a native and saying she was the most fluent in Vietnamese among South Korean singers based in the country.

To speak Vietnamese fluently took a lot of practice. After graduating in Vietnamese from the South Korea Language University, she decided to come to Ho Chi Minh City and start her career here.

In the beginning she had difficulty communicating with people because they spoke too fast.

Then, Jin found a way to improve her Vietnamese by making friends with locals and going out a lot. She also has a secret weapon to speed up the process: songs by popstar Son Tung M-TP, a current rage.

Every night she goes to YouTube to listen to his songs and sings along with them until she falls asleep. She also sings cover versions of his songs to improve her diction.

“The hardest song I have covered is Son Tung’s latest hit Hay Trao Cho Anh (Give It To Me). I had to sing the word ‘khoanh khac’ (moment) over and over again to get it right.”

Jin hosts her own acoustic show, ‘Jin Ju’s Lounge’, every Wednesday. She prepares for each show by writing four pages of script in Vietnamese.

After a year in Vietnam, Jin says  she can understand 95 percent of the conversation when talking to a native and it only takes her one or two days to remember the lyrics of a song.

She said she decided to become a singer because she wanted to develop her linguistic skills through music.

“When I release a Vietnamese song, I must remember the lyrics, pronounce the words right and put my emotions into it. I like to record in Vietnam because the studio will point out my mistakes so that I can correct them and get better the next time.”

Even before entering the world of V-pop last year, the 25-year-old had attracted attention on social networks with her looks and fluency in Vietnamese.

She has released four Vietnamese songs so far, and their Korean versions have all been in the top 100 listing by Melon, the biggest music streaming site in South Korea. Teenagers arrested for groping, robbing British woman in Hoi An