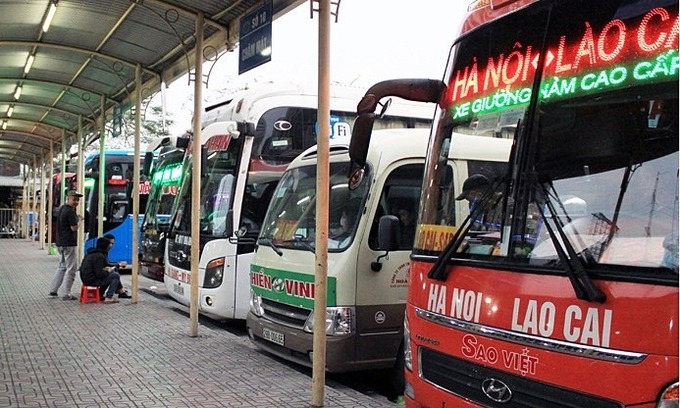 Buses at My Dinh Bus Station in Hanoi on February 17, 2020. Photo by VnExpress/Anh Duy.

“This is still better than other days when I had to drive an empty bus for six hours,” the 43-year-old driver said.

Before the coronavirus outbreak, each of Quyet’s trips included at least 30 passengers, and with a co-driver he could make three a day to Lao Cai Province, bordering China.

But as the number of passengers fell because of the epidemic, Quyet’s monthly salary dropped by half to VND10 million ($429).

Sao Viet Bus, Quyet’s employer, slashed its Hanoi-Lao Cai route buses from 30 to 10 since the outbreak as the number of passengers fell by half.

CEO Do Van Bang said the company is bearing losses worth billions of Vietnamese dong (VND1 billion = $42,900) a month, therefore the cutdown of trips was inevitable. “But even with fewer trips, some busses carried only one or two passengers.”

Other transport companies face the same dilemma, with the coronavirus dampening travel demand and hurting the logistics industry.

My Dinh Bus Station, one of the largest in the capital and usually packed with commuters, proved unusually deserted in recent weeks with passenger numbers falling by up to 40 percent.

“The number of buses here has never been this low. The virus has had a huge impact on travel habits,” said Ly Truong Son, station director.

Chauffeur companies are struggling too. DNT Joint Venture International Company Ltd has seen its 25 buses and minivans idling away in the parking lot the past few days, a contrast to the same time last year.

“We have not been able to sign any contracts for the next few months. The business is almost paralyzed.”

Son Ha Logistics Company, operating over 100 container vehicles, now run only two trips a month along certain routes compared to five previously as some of its trucks remain stuck at the northern border with China.

The impact of the outbreak urged Hanoi Transport Association to call an emergency meeting with business leaders last week to brainstorm solutions.

Bui Danh Lien, association chairman, said many small and medium transport companies are at risk due to dropping revenues amid large bank debts.

The association has requested government support in delaying repayment deadlines and cut down road fees on agriculture produce containers until the end of the second quarter.

Meanwhile, the epidemic continues to hurt drivers like Quyet, who has only met his family once since the outbreak commenced as he tries to limit transmission of the virus.

“If the number of passengers keep falling, I could lose my job.”