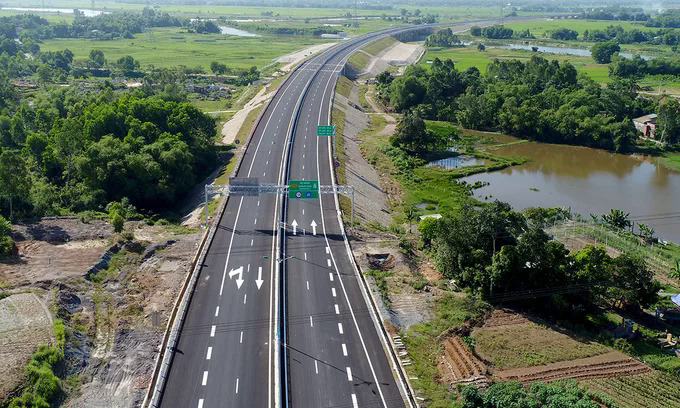 A section of the Da Nang – Quang Ngai Expressway which will be connected to the North-South Expressway. Photo by VnExpress/Dac Thanh.

Construction on the first section of the North-South Expressway, a VND7.7 trillion ($331 million) project in central Vietnam, commenced Monday.

The 98-kilometer Cam Lo-La Son section, which connects the central provinces of Quang Tri and Thua Thien Hue, will have four lanes with a width of 23 meters. On opening to traffic in 2021, the expressway will allow speed up to 80 kilometers per hour.

At the project’s inauguration ceremony, Prime Minister Nguyen Xuan Phuc reminded the Ministry of Construction, the project’s management board, and contractors to “fully realize their responsibilities, stick to schedule, ensure work quality, and combat violations and corruption in capital construction investment.”

The Ministry of Transport will continue to complete procedures to start work on the remaining sections of the North-South Expressway, two of which are wholly state-funded and another eight are in the form of public-private partnerships.

The Cam Lo-La Son section, one of three state-funded sections of the North-South Expressway, is a key project for the Ministry of Transport this year. The other two are the Cao Bo-Mai Son Expressway in the north and My Thuan 2 Bridge in the south. Work is yet to commence on either.

Together, the 11 sections of the North-South Expressway will cost over VND118 trillion ($5.1 billion), of which VND55 trillion ($2.37 billion) will be funded by the state.

The 11 sections will stretch 654 kilometers from Nam Dinh Province near Hanoi to Vinh Long Province to the southwest of Ho Chi Minh City. They are part of the 2,000-kilometer long transnational expressway that is set to be finished by 2025.