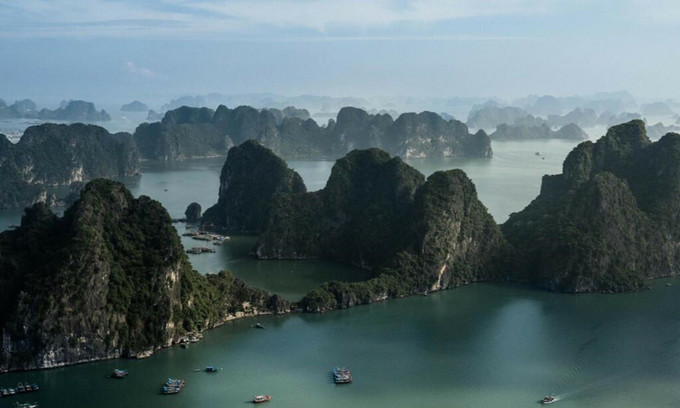 With the summer coming to an end, photo editors of NatGeo, a world-famous magazine covering science, geography, history, and world culture, invited photographers to look back at their favorite scenes.

Filipina Hannah Reyes Morales’ photo of Ha Long Bay in Quang Ninh Province, around four hours to the east of Hanoi, taken during her recent trip, featured among their 24 best.

“Summer in Southeast Asia for me is about the sea,” NatGeo quoted Morales as saying.

“Ha Long reminded me of days in my teenage years, coming of age with salt in my hair from sticky, warm summers by the water. So distinct. Everything in the country felt new to me when I took this image. But the blues and greens of the water were comforting in their familiarity.”

Ha Long Bay is an increasingly familiar name on the global tourism map, with its popularity confirmed by routine listings in prestigious magazines.

Around 5.2 million foreigners visited Ha Long Bay last year, up 22 percent from a year ago and accounting for 30 percent of the 15.6 million foreign tourists to come to Vietnam.

Recent events that have heightened the bay’s attraction include the filming there of Hollywood blockbuster Kong: Skull Island in 2017 and the launch of Vietnam’s first private airport, Van Don International Airport, in Quang Ninh late last year to offer foreign tourists easier access.

Other top summer photos voted by NatGeo’s editors included of the Okavango Delta in Botswana, an offering of June apricots in Tokyo’s Shinjuku Gyoen National Garden, boats gathering on the Meghna River in Bangladesh, and a train trip in China’s Xinjiang.