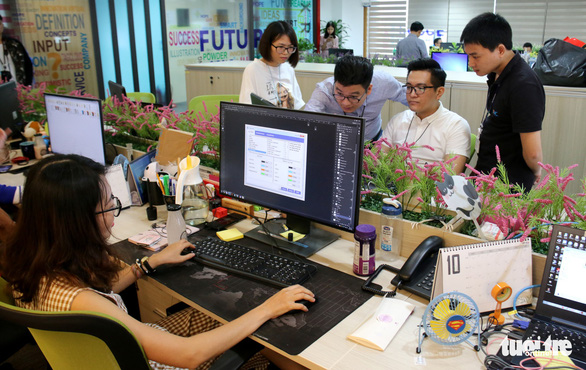 People are seen at work at a company in Hanoi. Photo: Ngoc Hien / Tuoi Tre

Vietnamese Gen Xers, or people born between 1965 and 1980, outplayed two other demographic cohorts when it comes to desire to switch jobs in the second half of this year, findings from a survey released Wednesday show.

Recruitment company VietnamWorks polled 4,000 employees in the country in July for its report “Online Recruitment Market in Vietnam Mid-year 2019.”

More than 75 percent of respondents said they want a job change in the last six months of 2019, according to the survey results published on VietnamWorks website.

Among employees who want a new job, Gen X made up the biggest proportion – 83 percent, compared to 74 percent and 71 percent of Gen Y and Gen Z, respectively.

Of the polled Gen X employees, 54 percent have been working for one same company for five years or more, and 82 percent are in managerial or higher positions.

The experienced employees are searching for new job opportunities for better remuneration and working conditions, according to the survey.

Specifically, 33 percent of them wish to have higher salaries, 29 percent look forward to better benefit policy, and 25 percent need a different workplace with more cultural and corporate values.

The survey also found that the longer an employee stays at a company, the more likely they are to look for new jobs.

Particularly, 81.3 percent of employees who have worked from three years or more for their current company want a new job in the last six months of 2019, compared to only 67 percent among those who have been in a workplace for less than a year.