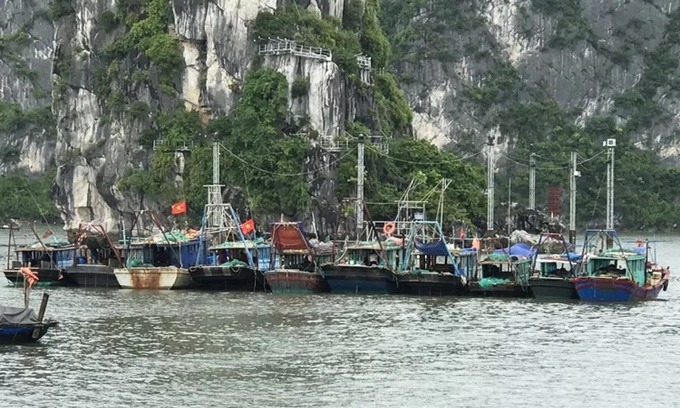 Ships are docked in Ha Long in Quang Ninh Province in preparation for Wipha, August 1, 2019. Photo by VnExpress/Minh Cuong.

Quang Ninh Province has banned sailing in the Ha Long Bay and other tourist spots to avoid Wipha storm accidents.

“By this morning (Thursday), the ships had returned to their harbors,” said Vu Manh Long, director of the Quang Ninh Port Authority of Inland Waterway.

Residents have been warned of the storm’s expected course on Wednesday, he said.

The Co To Island District of Quang Ninh, with a population of 5,000 people, could be the first locality to be hit by the storm.

Officials said there are around 300 tourists remaining on the island, including four foreigners.

300 of 350 ships have been recalled from the island, with the rest to follow on Thursday afternoon. Houses on the island have been strengthened.

Wipha, the third storm this year to appear on the East Sea, known internationally as the South China Sea, is expected to bring rough seas and strong winds in the Gulf of Tonkin this afternoon. Satellite images at around 2 p.m. showed thick clouds covering the entire gulf, including islands like Bach Long Vi, Cat Hai, Co To and Van Don.

Wipha’s eye is expected to be directly above Quang Ninh and the northern city of Hai Phong on Friday night, with a maximum wind speed of 90kph, according to the National Center for Hydro – Meteorological Forecasting.

It is likely to make landfall in coastal provinces from Quang Ninh to the northern province of Nam Dinh before weakening into a tropical depression, weather experts say.

The storm would cause downpours in northern Vietnam until Sunday. Hanoi should expect rainfall of 100mm to 200mm on Thursday. Rainfall of 180 mm a day is considered heavy.

Vietnam is hit by up to 10 tropical storms during the monsoon season, between July and October. This year, the country is expected to be directly affected by four storms and tropical depression.