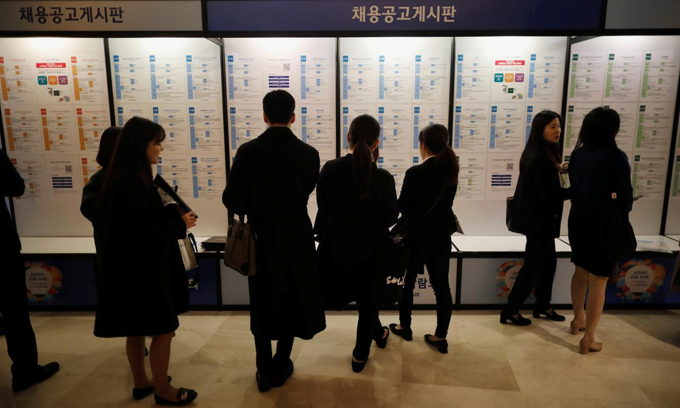 A bad job crunch is pushing many South Koreans to seek employment abroad, and Vietnam is a favored posting.

“In South Korea, I can only look for jobs without much prestige, like a photocopy guy. So I decided to come to Vietnam and gain some work experience,” Choi Chang-min, a 31-year-old South Korean man, told VnExpress.

Choi has two bachelor’s degrees in international trade and finance and currently works as an executive assistant for a Korean company producing fashion garments for export in the northern province of Hung Yen, 54 km south of Hanoi. His main task is to make production plans and manage inventory.

Choi is among 400 South Koreans who’ve moved to Vietnam to work under a program called K-Move, launched by the South Korean government to connect young Koreans to “quality jobs” in 70 countries.

K-Move found overseas jobs for 5,783 graduates last year, more than triple the number in 2013, when it was first launched, Reuters reported.

The unprecedented paucity of jobs at home has seen many young South Koreans, who account for about a fifth of the 51 million population, signing up for government-sponsored programs designed to find overseas positions for a growing number of jobless college graduates in Asia’s fourth largest economy.

In 2018, South Korea generated the smallest number of jobs since the global financial crisis at 97,000.

Nearly one in five young Koreans was out of work in 2013, higher than the average 16 percent among the member of countries of the Organization for Economic Cooperation and Development.

In March, one in every four Koreans in the 15-29 age group was not employed, either by choice or due to the lack of jobs, according to government data.

The fiercely-competitive job market at home is driving more Koreans to the K-Move program every year. The government has also increased budget support to meet rising demand – from 57.4 billion won ($48.9 million) in 2015 to 76.8 billion won in 2018, according to data released by lawmaker Kim Jung-hoon.

Park Hyung-gi, deputy director of the Human Resources Development Agency for South Koreans in Vietnam, said the South Korean government was encouraging young graduates to seek jobs abroad “towards globalization,” even as joblessness rises to high levels at home.

The number of young South Koreans flocking to Vietnam for work has been on the rise in recent years as many Korean-invested companies set up shop in the country.

In 2018, 383 South Korean job-seekers moved to Vietnam under the program compared to 288 from 2016. They mainly sought managerial, technical or assistant positions.

On a global scale, Japan, the U.S., Australia, and Singapore are the most favored job markets by young South Koreans. Almost one-third last year went to Japan, which is experiencing a historic labor shortage with unemployment at a 26-year low, while a quarter went to the U.S., where the jobless rate dropped to the lowest in nearly half a century in April, Reuters reported.

Previously, young college graduates in South Korea went to China to work, but they are switching to Vietnam now.

“Due to the rapid economic growth, Vietnam has emerged as a rising star in Asia in the eyes of young Koreans,” Park said.

With once attractive Southeast Asian countries like Thailand, the Philippines, Malaysia and Myanmar as options, Choi decided to choose Vietnam to build a career because he felt the country made him “more energetic.”

He started working in Vietnam in July last year, and he has found life quite pleasant because he feels the two countries have cultural similarities that help him overcome difficulties in communicating, given his lack of proficiency in Vietnamese.

Ku Bo-reum, 24, also followed the ‘K-Move’ program to come to Vietnam to work as an architect for an interior decoration and construction company whose branch is in the northern Hai Duong Province. She has a bachelor’s degree in architecture and has worked part-time for famous brands like Uniqlo and H&M.

“Many of my friends say that Vietnam is a land of opportunity and we can gain valuable experience in a rising economy,” Ku said.

She said she planned to work in Vietnam for around three years and then move to another country like the Netherlands or New Zealand to continue her career.

Ku feels that she is now paying an extremely high rate of income tax at nearly 30 percent of her income. She said she hoped Vietnam will be able to adjust tax regulations for foreigners.

Such issues notwithstanding, the South Korean government wants to promote the K-Move program further to increase the number workers in Vietnam, Park said.

He recommended that Vietnam should highlight its development vision and widely propagate information about what Vietnam needs to attract young Koreans. Vietnam should also invest heavily in infrastructure, roads and information technology systems to call for more and more investments from Korean businesses.

Choi said he planned to stay on in Vietnam for a long time – between five to 10 years.

“I don’t intend to go to another country as I wish to equip myself with necessary skills here and accumulate capital in order to start my own business.”