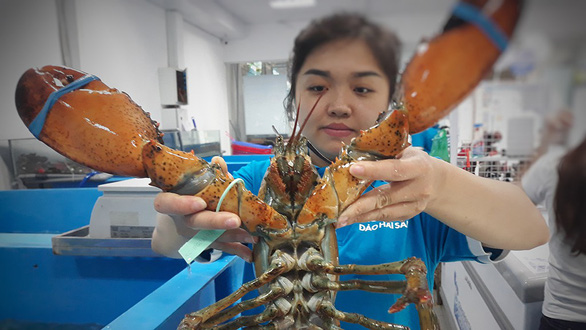 Vast amounts of imported seafood have entered Vietnam’s market so as to meet rising demand, causing prices to plummet as much as 65 percent.

In 2018, Vietnam imported US$1.72 billion worth of seafood from other countries, an increase of almost 20 percent in comparison with 2017, according to the Vietnam Association of Seafood Exporters and Producers (VASEP).

Some of the main markets that supply Vietnam include India, Norway, Japan, and China, among others.

According to the manager of a seafood importing business in Ho Chi Minh City, prices now range anywhere between millions of dong and hundreds of thousands of dong per kilogram.

More affordable choices, which are in even higher demand, have also been introduced to Vietnam, with the most common options being Norwegian salmon for VND400,000 ($17.3) a kilo, the cheaper variety of Korean oysters for VND 900,000 ($39) per kilogram, and Korean flounders for VND980,000 ($42) per kilogram.

The manager also said that his sales had surged 15 percent year on year, with Korean flounders and oysters being the best-sellers.

Tuoi Tre (Youth) newspaper reporters have visited some seafood markets in Ho Chi Minh City and found that around 30 to 50 percent of the products are imports.

Many suppliers choose to import fresh seafood from abroad, in addition to frozen one, to supply restaurants across the country.

According to La Maison, a meat and seafood trader in Ho Chi Minh City, it purchases seafood from different countries all year round but still runs into shortage during high-demand seasons.

The increase in the amount of imported seafood results from a drop in Vietnam’s fishery productivity in contrast with rising demand and the need for variety, a wholesaler of seafood in Ho Chi Minh City said.

This has significantly brought down the prices that were once too expensive for the majority of buyers.

According to this supplier, before imported seafood was sold widely on the market, most imports were shipped to Vietnam in small amounts, turning them into rare and luxurious types of food.

Many seafood sellers say that imported seafood prices have slid by up to 65 percent year on year.

“Seafood of many types is being highly preferred and becoming more common,” Vo Phuoc Hung, a representative of a seafood supply chain in Ho Chi Minh City, said.

“High market demand and the wide availability of seafood imports have slashed their prices, so more customers can now afford them,” he added.

According to a representative of Binh Dien Market, the largest wholesale market in Ho Chi Minh City located in District 8, seafood imports include five to seven different types and amount to around 80 metric tons in total every night, the majority of which are frozen, with a steady supply all year round.