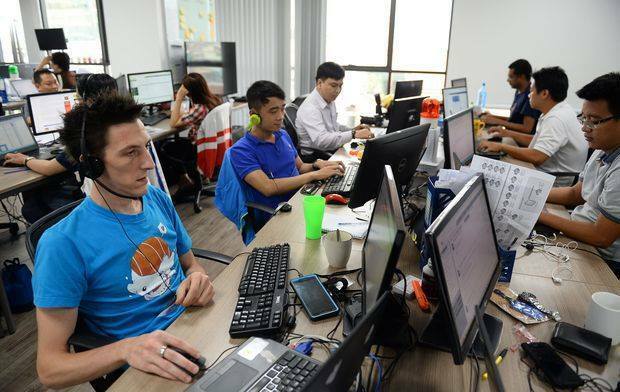 Foreign and Vietnamese employees at a tech company in Saigon. Photo by AFP/Kham.

Vietnam has climbed eight places to 10th in the list of best countries for expats to work and live.

This is a key finding from HSBC’s Expat Explorer survey, which polled 18,059 overseas workers from 163 countries and territories through an online questionnaire between March and April this year.

The respondents were invited to share their opinions on the country they were currently living in, in terms of their satisfaction with quality of urban living, political stability, work-life balance, disposable income, career progression and economic stability.

“Most expats moving to Vietnam say they were able to quickly adjust to the way of life there, feeling at home within the first few months of arriving,” the HSBC report said.

Expats also expressed surprise at the benefits of working in Vietnam. Many receive salary increases which, given the relatively low cost of living, provides them with far more spending power to enjoy everything the country has to offer.

HSBC’s similar survey in 2017 showed that expats in Vietnam could earn as much as $103,000 per year on average. The figure announced in the bank’s 2018 survey report was $90,408, an amount 36 times higher than the average annual income for Vietnamese, which was around $2,500 last year.

A friendly living environment, political stability, ease of settling in and work-life balance have pushed Vietnam ahead of other Southeast Asian neighbors like Malaysia (16th), Thailand (22nd), the Philippines (24th) and Indonesia (31st).

Switzerland is ranked the best place in the world to live and work, stealing the crown from Singapore which was at the top for five consecutive years. Singapore came in second in the ranking, followed by Canada, Spain and New Zealand.

Vietnam was ranked 18th in a similar survey by HSBC last year.

Around 82,000 foreigners live in Vietnam. Recent surveys have shown that the country is a good place for foreigners to settle.

A survey done by Go Overseas, a U.S.-based listing and reviews site for programs abroad, last year showed that Vietnam was among the world’s nine countries paying the highest salaries for ESL (English as a Second Language) teachers.

The InterNations’ 2018 Expat Insider survey, published in March last year, ranked Vietnam among the 10 friendliest places on earth for expats.