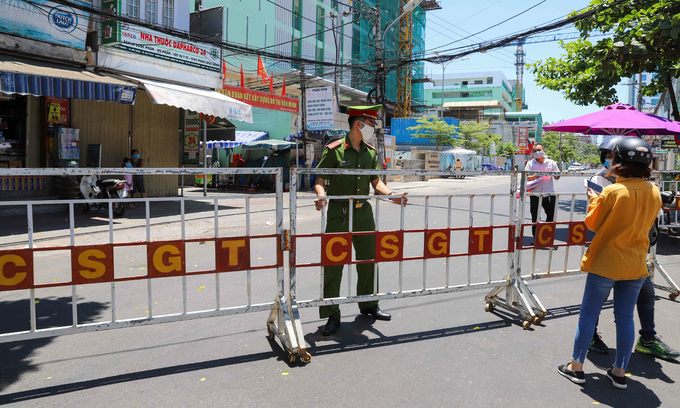 A police officer in Da Nang sets up barriers to isolate areas around hospitals where cases of Covid-19 have been detected, July 28, 2020. Photo by VnExpress/Nguyen Dong.

Da Nang should be considered a “dangerous Covid-19 epicenter” and placed under complete lockdown like China’s Wuhan City, the HCMC Party chief has said.

According to the World Health Organization, one of the criteria for a country to declare a national epidemic is having 10 cases for every million population.

City Party Secretary Nguyen Thien Nhan told an online government meeting on Sunday: “In Vietnam, the ratio is currently 2.7 infections per million, and so, generally speaking, we are still safe. However, Da Nang is another story as it has gone far beyond that threshold.”

The city, which has a population of 1.1 million, has recorded 120 infections since local spread of Covid-19 was found again after more than three months on July 25.

The disease has since spread to eight other cities and provinces, and includes 35 cases in Da Nang’s neighboring Quang Nam Province, eight in HCMC, three each in Quang Ngai and Dak Lak, two in Hanoi, and one each in Thai Binh, Ha Nam and Dong Nai.

“It is necessary to identify Da Nang as the especially dangerous epicenter,” Nhan said.

Da Nang began a 15-day period of social distancing on July 28, which requires people to stay at home and maintain a distance of at least two meters from each other in public. Public gatherings of more than two people are prohibited, except at offices, schools and hospitals.

Since the Ministry of Health has said the outbreak in Da Nang has been going on “quietly” for more than one month now, and it is possible that many infected people have yet to show symptoms or be diagnosed, Nhan suggested that “Da Nang should apply the strictest measures to control the outbreak.”

The strictest measures seen internationally have been those applied in Wuhan, the capital of China’s Hubei Province.

Wuhan made headlines late last year and early this year as the place where, according to experts, the novel coronavirus first spread to humans. The city was placed under complete lockdown for two months from January 23 to March 22 and the populace was ordered to stay at home.

At first each household was allowed to send one member out once a day for shopping, but later that was also stopped. Each family was given a file to fill its requirements, and authorities sent workers to collect them, shop and deliver the goods.

The HCMC party chief also raised concerns about Da Nang’s capability to isolate people having and suspected to have the disease.

In HCMC’s experience, it had to isolate 280 people every time an infection was confirmed, and this rate for Da Nang means it needs to isolate more than 30,000 people, and evidently it does not have the space for it, he pointed out.

Da Nang should therefore quarantine people at home, he said.

“The biggest challenge now is to make quarantining at home as effective as possible, and each person should have the responsibility to monitor others.”

The period from August 23 to 30 would be a “high-risk” phase, and without drastic measures Vietnam could reach the ratio of 10 infections per million people, and have 970 Covid-19 patients in hospitals compared to 242 now.

Without aggressive methods during the next 30-day “golden” period, Vietnam could face a pandemic, with HCMC and Hanoi running the greatest risk because many people returned there from Da Nang between July 1 and 27, he said.

The number of people traveling by air alone from Da Nang to HCMC in that period was 140,000, he said.

Both cities have done mass testing of returnees, shut down non-essential businesses like bars and karaoke parlors and called off all festivals and religious gatherings.

Six people have died, all in the last four days after contracting the new coronavirus at hospitals in Da Nang.

More than 103,000 people are in quarantine across the country.