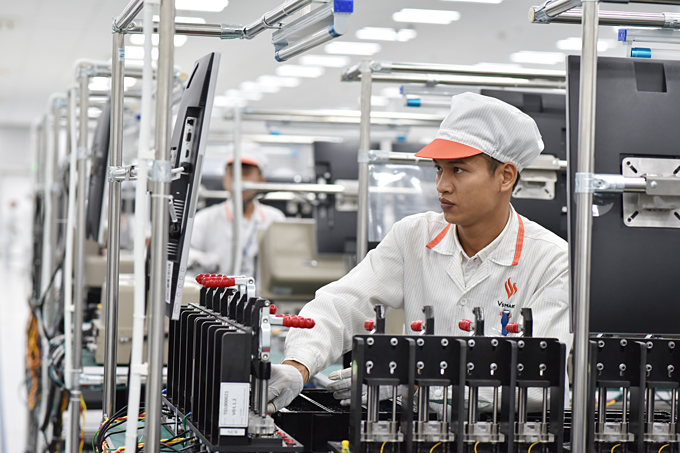 A worker at a VinSmart factory. Photo courtesy of VinSmart.

Vingroup has signed partnerships with Japan’s Fujitsu and the US’s Qualcomm to make 5G smartphones in Vietnam.

The three partners will develop a “special” Vsmart brand 5G phone which will use Qualcomm’s Snapdragon 5G modular platform, while also integrating Fujitsu’s advanced features such as battery saving, IP68 waterproof standard, and its best 4G + 5G antenna system, according to the partnership agreement.

The smartphones will be made at the Hoa Lac Hi-Tech Park in Hanoi, and are expected to be sold in the U.S. and Europe starting April 2020.

The model will be the first Vsmart phone to have 5G technology and will also make VinSmart, Vingroup’s electronics unit, one of the first 5G phone manufacturers in the world, said the group’s vice chairman Nguyen Viet Quang.

It will also make Vietnam one of the first countries to produce and apply 5G technology. Through this cooperation agreement, Vietnamese engineers can quickly learn, capture and develop the technology to build next generation 5G phones independently, Quang said.

VinSmart last year acquired the patents for its four first phones from Spanish technology firm BQ, in which it owns a 51 percent stake.

The group began selling Vsmart phones in Myanmar after launching it in Spain in March. It plans to expand to India, Thailand, Laos, and Cambodia this year.