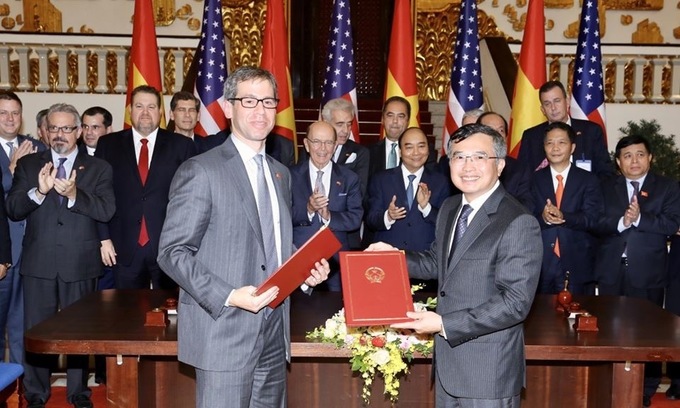 Deputy Minister of Industry and Trade Hoang Quoc Vuong (right) and AES Corporation’s representative at the MoU signing ceremony on the execution of the Son My gas power plant on November 8, 2019. Photo courtesy of the U.S embassy in Hanoi.

Vietnam and the U.S. signed memorandums of understanding on major business deals worth $2.7 billion on Friday as the two countries seek to reduce the latter’s climbing trade deficit.

U.S.-based AES Corporation, a Fortune 500 energy compay, signed an MoU with the Ministry of Industry and Trade on the implementation of the 2,200 MW Son My 2 combined cycle gas turbine power plant.

The $1.7 billion LNG-fueled power plant in the central province of Binh Thuan is set to begin commercial operations in 2024.

Son My 2 complements AES’ investment plans in gas infrastructure in the country with its previously announced $1.4 billion Son My LNG import terminal, which received approval from the Vietnamese government in August this year.

The two projects will play a major role in shaping Vietnam’s energy future by diversifying the energy mix with imported LNG, as well as meeting the country’s increasing demand for sustainable and affordable electricity, AES said in a release.

Pratt & Whitney will service the airline’s fleet of Airbus A321neo aircraft for 12 years. Vietnam Airlines operated its first A321neo last year and is set to have a total of 20 jets by next year.

The MoUs were signed against the backdrop of the U.S.’s increasing trade deficit with Vietnam, an issue that has engaged the Trump administration.

The U.S. had a trade deficit with Vietnam of $40 billion last year, the highest to date, with records going back to 1990, according to U.S. Census Bureau data.

“We are losing $110 million dollars per day in our trade imbalance with Vietnam. This is neither sustainable nor tolerable,” U.S. Commerce Secretary Wilbur Ross said Friday during his official visit to Vietnam.

However, the signings stress the strong potential for deficit reduction and they could lead to fruitful business opportunities for American companies, he added.

In the first 10 months this year, the U.S. was Vietnam’s largest export market with total exports value of $49.9 billion, up 26.6 percent year-on-year, according to Vietnam’s General Statistics Office.

In the same period, Vietnam imported $12 billion worth of goods from the U.S., up 12.6 percent year-on-year, it said.