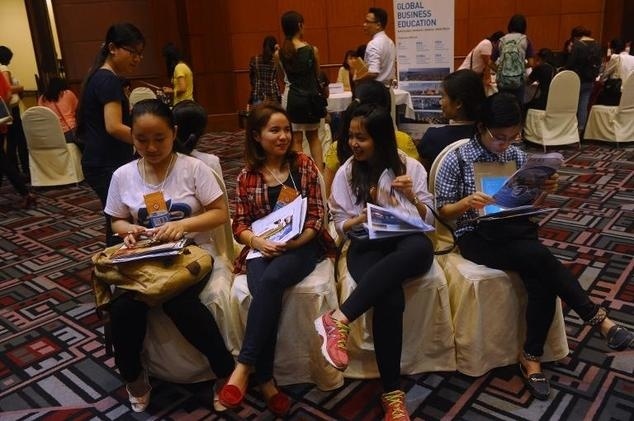 The elation of going abroad soon runs into a gamut of challenges – homesickness, weather, academic rigor and the weight of expectations.

It is extremely quiet in the library, so Hoang Cam Giang was startled by the peal of laughter and the sound of a chair scratching on the floor. The sounds, coming from an adjacent reading room, seemed unnaturally loud. Library staff soon showed up and led a mentally disturbed person out.

For Giang, a visiting scholar at Harvard’s Yenching Institute and Asia Center, that incident in the Widener library is unforgettable.

She says many students face psychological problem at Harvard. The demand for medical help on campus is so great that it may take as long as three months for a student to schedule an appointment with university doctors.

What Giang sees isn’t rare among Vietnamese students studying abroad, many of whom are shouldering the burdens of homesickness, weather, academic rigor and the weight of expectations.

Dr. La Thi Buoi, at the Hanoi-based Center of Educational Pschology Counselling, says her center has seen about 100 students who suffer from depression while studying abroad in the past 2-3 years; and many of them have suicidal thoughts.

Among Vietnamese research students, mild depression is common. Mild means the students can overcome their negative feelings and regain balance on their own without having to consult doctors.

Experts in various Vietnamese mental health institutions have confirmed with local media that they are treating many patients who became depressed while studying abroad.

Psychologists and psychiatrists say the biggest cause of depression among Vietnamese research students is academic pressure. Students typically have to study very hard to bridge the distance between Vietnamese and international educational standards, different ways of thinking and working, and get no time to relax and unwind.

The situation worsens because they cannot share their problems deeply with relatives or friends, as they would in Vietnam. However, pressure abroad is compounded by pressure from home, too. In professional circles and in general, high expectations are placed on everyone who studies abroad.

Giang personally knows of four severe cases among Vietnamese research students studying in the U.S. who had to be treated clinically.

Hoa Tran, Founder and CEO of Summit Education Services, which provides English classes and consultancy to Vietnamese students, agrees that in recent years, there seems to be an increase in the number of Vietnamese students suffering from depression while studying overseas. However, she feels this trend should be put into a wider context in which depression is increasing among the student population in Vietnam and elsewhere in the world.

According to a report released recently by UNICEF and the Overseas Development Institute (ODI), up to 29 percent of Vietnamese teenagers suffer from neuropsychiatric problems. Common problems are anxiety, depression, loneliness, hyperactivity and attention deficiency.

Despites difficulties, more and more Vietnamese families are sending their children abroad for education. For many students, studying abroad is a way to access a cosmopolitan, enriching liberal education, gaining an edge in the increasingly competitive market at home.

According to government data, in 2017 there were around 130,000 Vietnamese studying abroad at all levels, and their top five destinations are Japan, the U.S., Australia, China and the U.K.

Nguyen Thuy Anh studies computer science at the Macalester College in Minnesota in the U.S. She feels the local weather is depressing. “It’s cold and dark here,” she said. “There are days when I just stay in one building after another for classes without a single moment to get out for some fresh air.”

The winter lasts 6 months or longer in Minnesota, and Thuy Anh often has to walk to classes in snowstorms. At such times, she feels discouraged and her motivation runs out. “But somehow I keep on going, because there is no other way,” she said.

A cold weather is worsened by loneliness. Nguyen Le Huong, a former Fulbright student at New York University, said her biggest problem was loneliness and difficulty in making friends.

When she studied in Vietnam, college students took the same classes day in day out for four years, and could develop friendships easily.

In the U.S., students can freely choose diverse courses to fulfill their major requirements and are more dispersed, having less regular contact with each other to make friends.

Depression aside, one of the biggest challenges that Vietnamese students face abroad is a major gap in critical thinking, which involves knowledge, attitude and habit.

Although they go to Western schools eager to learn and combine what they do with local sights, this is easier said then done, say some students.

The PhD students interviewed for this article were unanimous that writing papers highly stressful. The gap between the levels of critical thinking required in Western schools and the completely different approach adopted in Vietnam, especially in social sciences and humanities, is so great that it takes them a lot of extra effort to bridge.

For Lan Kieu, 10 years of studying for her graduate and doctorate degrees abroad have been 10 years of racing against time to “read, read and read.” Having to read so many “difficult things” in very little time is “terribly stressful”, she said.

For her, studying abroad isn’t about finding a lucrative job and a good life. It is a “sacrifice.” She has “sacrificed” her youth and time to read, reflect about reading and write, instead of taking life easy and enjoying herself.

If native students only need to read one book, foreign students like her would have to read two or three in order to hold their own. “We must be better to stand out,” Lan said.

Giang at Harvard is still dazed by the intellectual avalanche that has been crashing down on her, one year after joining. Giang is working on a thesis titled “From Eco-aesthetic to Eco-political Discourses in East Asian Socialist Countries: The Cases of Vietnamese and Chinese Commercial Cinema (2000-2018)”.

From Vietnam, where she suffered a dire shortage of theoretical resources, Giang now finds herself at the opposite extreme – where the source of materials is endless. However, most of the material applies to Western texts and contexts and there is almost no meaningful reference to East Asian literature and cinema.

“So I grope along as I read,” Giang said. “I often feel impotent, especially when I can’t understand a book’s logic. Sometimes I spend a whole week trying to figure out just two pages.”

Nguyen Anh Thu, a freshman at Clark University in Massachusetts in the U.S., has a smaller but no less challenging problem: she wants to practice speaking her mind during conversations and in class. “In Vietnam, I would sit and listen to people talk,” Anh Thu said.

“But abroad, everybody really wants to hear what I have to say.” In fact, students are often assessed on how they engage with the class and articulate their views. This is not something that happens regularly in a Vietnamese academic setting.

Despite difficulties, for many students, studying abroad is still an imperative. It broadens their knowledge and teaches them many practical things. For Giang, studying abroad is purely academic. “It is simply a way for me to find an answer to an intellectual question that has kept haunting me,” she said.