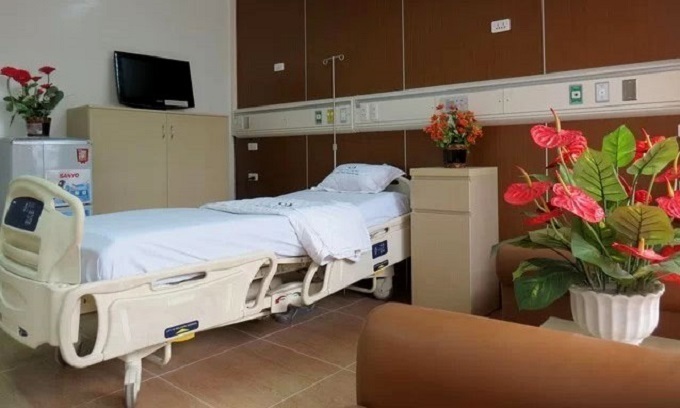 The Ministry of Health is drafting a proposal to have the cost of premium hospital rooms in public hospitals go up 37 percent from VND2.5 million ($107.3 ) a day to VND4 million ($171.7).

Since each room has just one patient bed, with an extra bed for a family member and space for welcoming visitors, it is like a premium hotel room, and nurses are on call at all times, said Nguyen Nam Lien, head of the Department of Planning and Finance under the Health Ministry.

There is a growing demand for premium services in hospitals, he said, adding that the proposal will allow this demand to be met.

Industry insiders say Vietnamese go abroad because there is a lack of top notch treatment and facilities in the country.

“If the bill is implemented well, Vietnamese patients will enjoy healthcare services at lower prices than in other countries, contributing to local hospitals’ income,” Lien said.

A bone marrow transplant in Vietnam, for instance, costs $8,000-15,000, but it is 10 times more expensive in Singapore and five times more in Taiwan, Phu Chi Dung, director of the Blood Transfusion Hematology Hospital in Ho Chi Minh City, said.

Up to 100,000 Vietnamese use healthcare services in another country every year, spending about $2 billion, the health ministry estimates.

Popular destinations are Malaysia, Singapore, Taiwan and Thailand. In Malaysia alone, the number of Vietnamese patients have risen from 8,000 in 2016 to 14,000 last year, according to the Malaysia Healthcare Travel Council. Vietnam is among the five largest healthcare markets for Malaysia, it said.

The bill is being drafted after Ho Chi Minh City last year began a medial tourism initiative by publishing a handbook on the city’s healthcare services for foreigners.

The city accounted for about half of the 80,000 foreigners who came to Vietnam for medical treatment in 2017. They spent $2 billion, of which HCMC accounted for $1 billion.

Last year, the health ministry recorded more than 300,000 foreigners coming to Vietnam for health treatment, up 50 percent against five years ago.

Vietnam’s fast-growing economy, with an aging population, is seeing increased spending on healthcare.

Healthcare expenditure in Vietnam was estimated at $16.1 billion in 2017, accounting for 7.5 percent of GDP, and is set to grow to $22.7 billion in 2021, a compound annual growth rate of 12.5 percent, according to market research firm Business Monitor International (BMI).