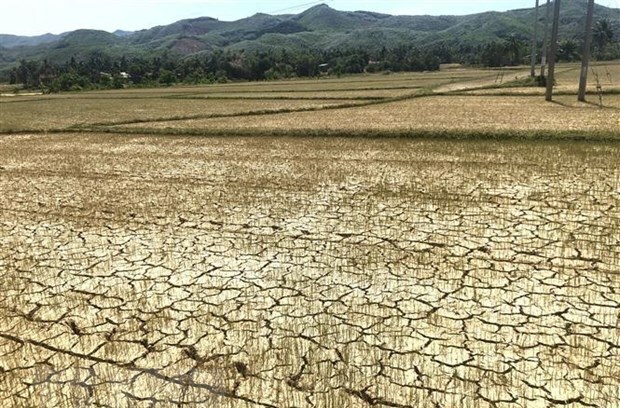 A paddy field in the Hoai An District of the central province of Binh Dinh is cracked in July 2019. Photo by Vietnam News Agency.

Some 138,800 households in the central region might experience a water shortage this summer as the levels in major rivers have dropped below normal.

Some rivers have experienced decreases of over 70 percent, including the Ma River in Thanh Hoa Province, the Ca River in Nghe An Province and the Ba River in Phu Yen Province, the Ministry of Agriculture and Rural Development said.

Dams in the region are only 25-60 percent full, with some even running dry, it said, as cited in a Vietnam News Agency report.

Temperatures in Thanh Hoa Province have been around 36-38 degrees Celsius (96.8-100.4 degrees Fahrenheit) since June while Phu Yen’s heat reached 39 degrees on many days this month.

The hot weather and low moisture levels in the region have increased the rate of evaporation to 5-7mm/day, which is 20-30 percent higher than normal, the ministry said.

Some 114,000 households in the central region are experiencing water shortage right now, but the figure may rise to 138,800 if the hot weather continues until the end of the dry season in July in the north-central region and August in the south-central region, the ministry said.

Another 65,500 hectares of rice and other crops in the central region might be affected by drought and water shortage this year if the hot weather continues, the report said.

Soil salinity has also caused a shortage of irrigation water for 5,800 hectares of crops in the central region, it added.

Increased surveillance of weather patterns and soil salinity are among the suggestions the ministry has made to combat droughts and water shortages in the central region.

The region has long been plagued by periods of drought and water shortages due to hot weather. One of its provinces, Ha Tinh, broke the national temperature record in April with the mercury rising to 43.4 degrees Celsius.

An unprecedented drought and saltwater intrusion in 2016 caused water shortages for 600,000 households and salinized 160,000 hectares of land across the country, causing losses worth VND5.5 trillion ($237 million).