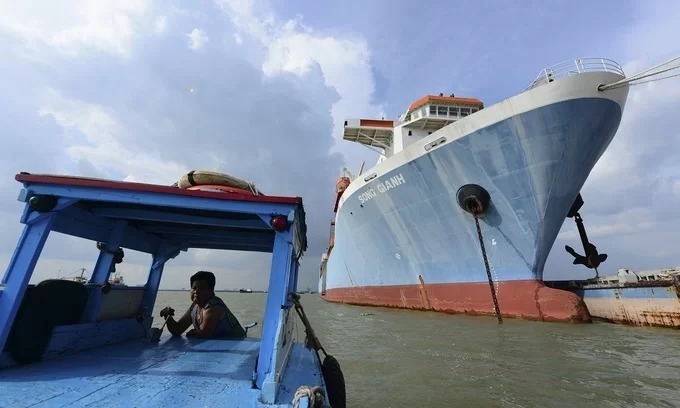 A man sails a boat near a cargo ship of Vinalines, Vietnam’s largest state-owned shipping firm and port operator. Photo by Reuters/Stringer.

Vinalines reported a loss of VND633 billion ($27 million) in H1 after failing to sell loss-making ships whose maintenance is expensive.

The country’s biggest shipping firm said it has 11 old ships with a cargo capacity of 232,000 tons which it plans to sell this year and replace with newer ones with better technology.

Not only do they not fetch profits but are also high-maintenance, company executives said.

The Vietnam National Shipping Lines (Vinalines) has a fleet of 81 ships with an average age of 16.7 years and capacity of 1.7 million tons, accounting for 25 percent of all ships flying the Vietnamese flag.

It targets a profit of VND223 billion ($9.6 million) in the second half of the year. It also plans to sell off three chronically loss-making subsidiaries and reduce its stakes in two others.