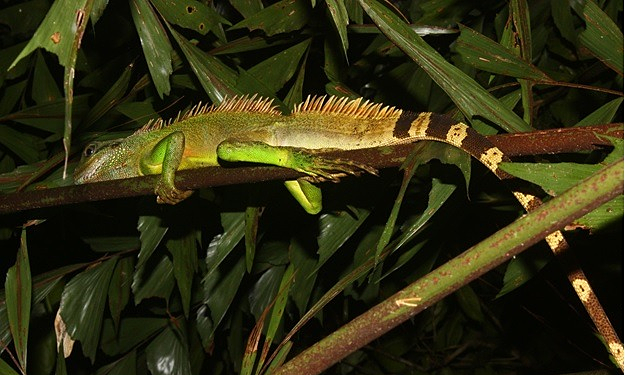 An Asian water dragon in the wild in Vietnam. Photo courtesy of the Vietnam National Museum of Nature.

The Asian water dragon has been hunted and caught in such large numbers in Vietnam, endangering it, that scientists are calling for its protection.

The mountainous area in the central province of Thua Thien Hue is the natural habitat in Vietnam of the lizard, which is native to China and Southeast Asia.

They did five surveys in the three districts of A Luoi, Phong Dien and Nam Dong and found that the hunting season normally lasts from February to October every year, with the peak months being April to July, the lizard’s reproductive season.

In those three districts alone, the team estimated that around 990 kilograms of the reptile are caught each year. An Asian water dragon, also known as Chinese water dragon, can reach the weight of one kilogram.

Nguyen Quang Truong, head of the team, said most lizards they found last year were young since the grownups had all presumably been caught or hunted.

The number in the wild has dropped strongly due to loss of habitat to human activities, and more importantly, being hunted down.

Adults are killed for their meat while young ones are sold as pets.

Data from the Convention on International Trade in Endangered Species of Wild Fauna and Flora shows between 2010 and 2017 over 55,700 Asian water dragons were imported into Europe and the U.S. from Asia, with 49,000 being from Vietnam.

In the target markets, most of them become pets or are used for their skin.

Given the situation, the research team suggested adding the lizard to the International Union for Conservation of Nature (IUCN)’s red list of threatened species, the world’s most comprehensive inventory of the global conservation status of biological species. IUCN now lists the species as vulnerable.

It also urged Vietnamese authorities to pay more attention to this species because it has been listed in the country’s Red Data Book, a list of rare and endangered species of fauna and flora native to Vietnam, but not protected, meaning there are no laws to deal with those hunting and catching the lizard in the wild.

The team also suggested farming the animal and reforestation to restore its natural habitat.