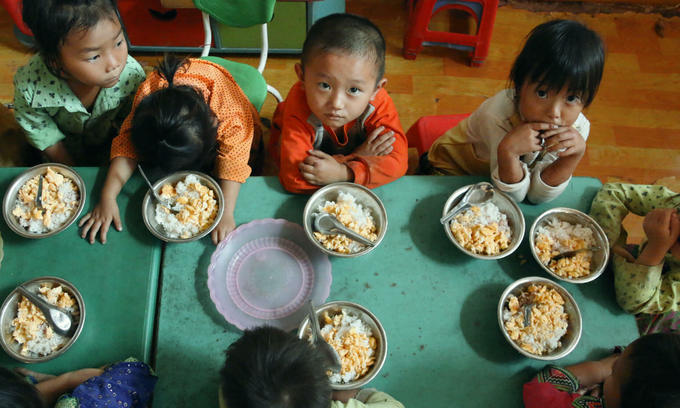 Children in the northern mountainous province of Dien Bien prepare to have a school lunch with rice and fried egg. Photo by VnExpress/Thanh Duong.

“The stakes are high – stunting will continue to affect one in every four Vietnamese children, permanently impairing their development and squandering their potential contribution to the economy, unless proper interventions are conducted during a child’s first two years of life,” Ousmane Dione, World Bank Country Director for Vietnam, said in a Thursday press release.

“The stakes are even higher for children from ethnic minorities who are disproportionately affected and have fewer resources.”

More than 119,957 (60 percent) of the 199,535 stunted children in the 10 Vietnamese provinces with the highest rates of malnutrition are from ethnic minorities, according to the World Bank report.

With 54 officially recognized ethnic groups, the Kinh account for 86 percent of the country’s population of 94 million. 75 percent of Vietnam’s ethnic minorities live mostly in the northern mountainous and Central Highlands regions. Vietnam’s hills and forested highlands have influenced its demographics and the extent and persistence of its inequity in poverty, health, and nutrition, the report noted.

It said that stunting is linked to lower economic productivity, including a 10 percent reduction in lifetime earnings. When multiplied across an entire nation, poor nutrition can cost a nation up to 3 percent of its GDP annually.

The World Bank and the United Nations Children’s Fund (UNICEF) have called for the Vietnamese government to make greater efforts to fight child malnutrition by funding nutrition-related programs, building multisectoral plans to address the underlying determinants of undernutrition and making early interventions.

The World Health Organization in 2016 listed Vietnam in the 20 countries with the highest number of stunted children. About 25 percent of Vietnamese children, or 1.9 million of them, are on average 10 centimeters shorter than their Asian peers.

In Vietnam, extreme poverty dropped to 2 percent in 2016 but poverty remains widespread among ethnic minorities, according to a report released by the Ministry of Labor, Invalids and Social Affairs and the United Nations Development Program (UNDP) late last year.