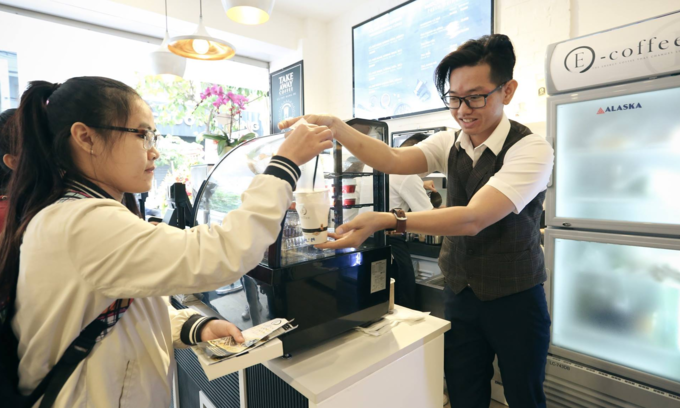 Customers paying for a cup of coffee at a Trung Nguyen E-Coffee shop. Photo courtesy of Trung Nguyen.

These coffee shops are different from the existing Trung Nguyen Legend chain, which requires an average investment of VND1 billion ($43,100) in investment for each shop, and tries to create a lot of space for customers to enjoy coffee, she added.

“E-Coffee is optimized for all locations including office buildings, metro stations, markets and convenience stores. In the beginning, Trung Nguyen will not charge brand and management fees from franchisees,” said Giang.

“The company will provide training programs, advice, business guidance and operational support for partners.” In addition to coffee and confectionery, franchisees are allowed to sell other beverages.

The new retail coffee franchise model already has 100 stores nationwide. By the end of this year, Trung Nguyen aims to triple this number, and expand to 3,000 stores in 2020.

According to the Trung Nguyen Group’s (TNG) 2018 financial report, the company earned revenues of VND4.8 trillion ($207 million) in revenue, an increase of nearly 8 percent compared to 2017, but pre-tax profits fell to VND347 billion ($15 million), a 50 percent decrease.

The report said the group has faced falling profits in the last three years due to rapidly rising operating expenses and internal conflicts between chairman Dang Le Nguyen Vu and ex-wife Le Hoang Diep Thao, who jointly managed the corporation.

Vu and Thao got divorced early this year. After months of litigation, the Ho Chi Minh City People’s Court ordered in March that the stocks and cash assets of TNG shared by Vu and Thao be split 60:40 in Vu’s favor in their divorce settlement. Thao has appealed.