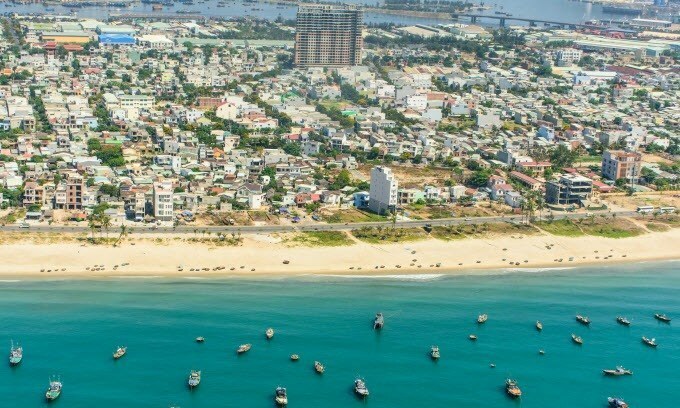 An aerial view of My Khe Beach in Da Nang City, considered one of the most beautiful beaches in Southeast Asia. Photo by Shutterstock/tonkin.

This is the first direct service between Da Nang and Haneda, Japan’s busiest airport and one of Asia’s busiest, Vietjet said in a release. Haneda is less than 30 minutes from downtown Tokyo. The new route operates daily return services with each flight taking around five hours and 30 minutes.

Vietnam has emerged as one of the most popular travel destinations for Japanese. Japan is also one of the country’s biggest investors. More than 600,000 Japanese visited Vietnam in the first ten months of the year, up 15 percent from a year ago.

Amid the Chinese tourism boom, Vietnam Airlines opened a direct route connecting HCMC with Haikou City in China’s southern province of Hainan on October 28, with four flights per week.

Vietnam received more than 4.5 million Chinese tourists in the first 10 months, up 9.4 percent year-on-year, accounting for 31 percent of all foreign arrivals.

This December, Vietjet Air plans to operate direct air services between HCMC and New Delhi and between Hanoi and the Indian capital, becoming the first Vietnamese airline to launch direct air links to India.

The number of Indian tourists to Vietnam remained low compared to other Asian countries such as China and South Korea, with only 130,000 arrivals in 2018. But the growth was 30 percent year-on-year. China and South Korea are Vietnam’s top feeder markets with 4.9 million and 3.4 million visitors last year respectively.

The number of international tourists to Vietnam reached 14.5 million in the first 10 months, surging 34.3 percent year-on-year, with Asian tourists accounting for 75 percent of total foreign arrivals, the Vietnam National Administration of Tourism reported.

A recent report by Mastercard said that Vietnam has the second fastest growing outbound market in the Asia Pacific region after Myanmar, with projected annual growth of 9.5 percent between 2016 and 2021. About 7.5 million Vietnamese travelers will travel outside the country in 2021, it added.