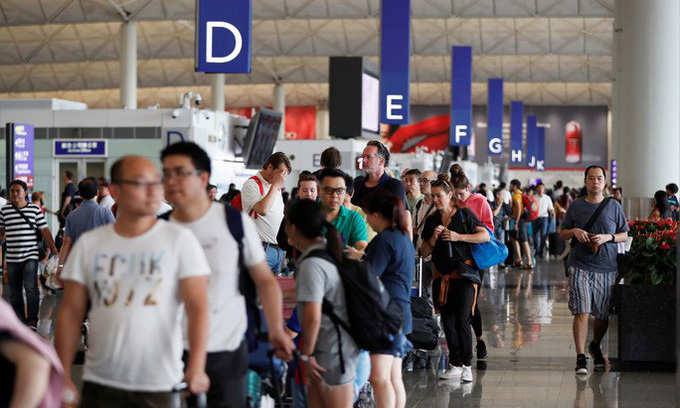 Passengers queue as the Hong Kong International Airport reopened a day after flights were halted due to a protest, on August 13, 2019. Photo by Reuters/Issei Kato.

Vietnamese travel agencies say tourists should avoid solo trips to Hong Kong and not separate themselves from tour groups.

They advised that it is better to avoid solo travel because it is highly risky. In case visitors join tour groups, they should follow the schedule and their guide strictly and not arbitrarily separate themselves from the group.

Hong Kong has been rocked by ten weeks of confrontations between police and protesters, plunging it into its most serious crisis in decades and presenting a serious challenge to Beijing.

Those planning to travel to Hong Kong at this time should proactively call ticketing offices and official agents of the airlines and seek their advice, travel firms noted.

August is not the busiest time for Vietnamese citizens visiting Hong Kong. The peak travel season is from October to the Lunar New Year festival, or Tet, Vietnam’s biggest and most important holiday, and early summer between May and June.

Truong Thu Giang, vice director of marketing and communications for Vietravel, a leading Vietnamese travel company, said that its tours to Hong Kong at this time were almost unaffected and visa application policies remained normal.

The massive demonstrations have only had a slight impact on tours to Hong Kong, Giang said, adding that the firm’s partners have considered reorganizing the itineraries for sightseeing attractions due to traffic jams on several major roads.

Some major tourist attractions such as Disneyland, Ocean Park and the wax museum are still kept on the schedule, she added.

Major travel companies in Vietnam have confirmed that no customers were trapped in Hong Kong due to the protests.

“Fiditour’s most recent group of tourists returned to Vietnam at the end of July. The next two tours are scheduled to depart during Vietnam’s National Day holiday (September 2),” said Tran Bao Thu, a Fiditour representative.

“However, we are constantly collecting updated information from partners, airlines and consulate agencies so that visitors and business situation are not affected,” she added.

As of Wednesday, there were no reports of Vietnamese citizens being affected by the Hong Kong protests.

Hong Kong is one of the world’s most popular tourism destinations and the disruption is hurting its hospitality sector.

According to the Hong Kong Tourism Board, preliminary figures show a “double-digit decline” in the number of arrivals in the second half of July. Flight bookings, too, have taken a hit.

The protests, which began as opposition to a now-suspended bill that would have allowed suspects’ extradition to mainland China, have swelled into wider calls for democracy.

They have prompted flight cancelations and delays by carriers based in Hong Kong. Vietnamese carriers were forced to cancel or reschedule last Tuesday’s flights as a rally by thousands of protesters triggered an unprecedented shutdown of the aviation hub.

Tourism is one of the major pillars of Hong Kong’s economy, contributing around 5 percent of its GDP.

News agency AFP reported empty hotel rooms, struggling shops and even disruption at Disneyland, saying months of protests have taken a major toll on Hongkong’s economy, and there was no end in sight.

It quoted Hongkong leader Carrie Lam as warning that the international financial hub was facing an economic crisis worse than either the 2003 SARS (severe acute respiratory syndrome) outbreak that paralyzed Hong Kong or the 2008 financial crisis.