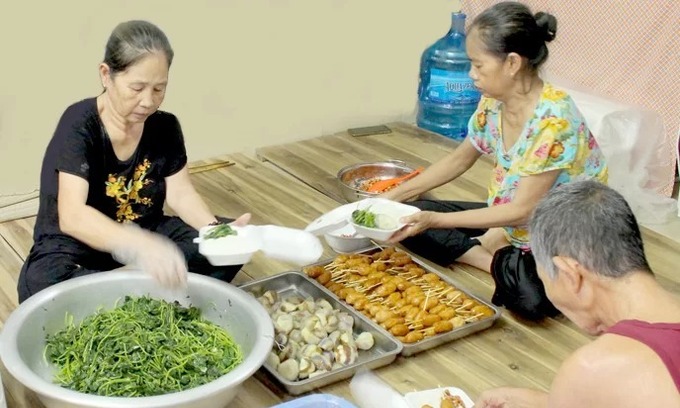 L-R: Xuan, Nhan and Chu from the southern province of An Giang cook vegetarian meals for poor patients at a hospital in Hanoi. Photo by VnExpress/Nhat Minh.

Every month, a group of elderly people travel 1,600km to cook free vegetarian meals for cancer patients in Hanoi.

As the afternoon light drops on the door of a room in Hanoi, Nguyen Van Chu, 73, struggles to sit back and relax.

In his worn clothes, the thin, tanned man says his place back home is airy and spacious and that it’s hard for him to get used to the summer heat of Hanoi, especially in the confines of a small, rented house.

But Chu refuses to get upset. He lies down, crosses his legs and chills out by singing vong co (southern traditional music which means, literally, “longing for the past”).

Chu is one of a group of four people from An Giang Province in Mekong Delta who are staying in Hanoi to cook free vegetarian meals for patients at the Institute of Medical Radiology and Oncology in Hoang Mai district.

Every afternoon, Chu drives a motorbike to the hospital and stops at every room to issue tickets for free meals. Anyone, patients, their families and even the hospital staff can get one ticket for a free lunch the next day.

After he gets back with the total number of tickets issued, three women in their 60s in the rented house will plan the menu for the next morning.

“The cut means less sick people, which is good news,” she said.

Giau, the other two women and Chu are volunteers with a social project based in An Giang. They cook free meals and offer free medicine to poor people in the southern region. The project is entirely funded by donors, mostly Buddhists.

Early this year, on learning that patients at the Institute of Medical Radiology and Oncology in Hanoi do not have access to free meals, the project supporters decided to send volunteers to the capital city.

Every month, four volunteers take turns to travel to Hanoi in a relay to keep their initiative going. All the funds for this sub-project, from the travel costs, rent and food items, comes from one benefactor in An Giang who wishes to remain anonymous.

“We can go home every month, but if I do not have any urgent work back home, I will stay to save the travel costs for the project,” said Giau, a single mom whose children are all settled.

On a typical day, she and the other two women get up at 4 a.m. to clean the vegetables and cook the food, which is completely vegetarian.

The volunteers themselves are vegetarian and the food they cook is what they have as their own meals, every day.

Stirring the cooked rice before putting them into boxes, Nhan said that on average, the group serves 70 portions every weekday and around 50 on the weekend.

“We change the menu every day. Only when they find the food tasty enough, we can be happy with our work,” she said, smiling.

All the patients who receive the free lunch packages are grateful for the help they get as they go through the tough process of cancer treatment or caring for cancer patients.

Nghiem Thi Hoa, a patient, said she has been hospitalized for more than a month and registers to get the free meal every day.

At 72, Hoa said she does not have anyone around to take care of her, and if there was no free-meal service, she would have to ask someone to buy food for her.

“Then I would also have to spend at least VND15,000 (more than half a dollar) for lunch each day. And there are days when there is some extra food left, I would ask for one more portion and save it for dinner.”

Another patient, Tran Thi Xuan, 42, said she has received several delicious meals from the An Giang team, but had no idea that the people who were making and serving the food were from the other side of the country. She was surprised and moved by the gesture.

What the four elderly people do is hard work, and the four volunteers struggle with the different weather conditions and sparse living, but they do not complain and get great satisfaction from being able to help other people.

“Every time I ask them if they’ve ever get tired, the answer is no. But there have been several nights I have seen them struggle to sleep…they would sit in the front of the house, chatting,” said a woman named Trang who rents a room next door.

Back in June, the group had to stop the service for a week because all members suffer from high blood pressure, as they are all elderly and living and working in the summer heat of Hanoi took its toll.

Sometimes, college students and volunteer youth based in Hanoi come to help the group, and their presence has been a joy for these elderly citizens.

On such occasions, Chu would try to speak with a northern accent, making people laugh and lightening up the atmosphere.

Giau said: “We’re human, when we die we cannot not bring anything along with us, except for our karma, so we do this firstly to share other people’s difficulties, and then, earn ourselves some good karma.”