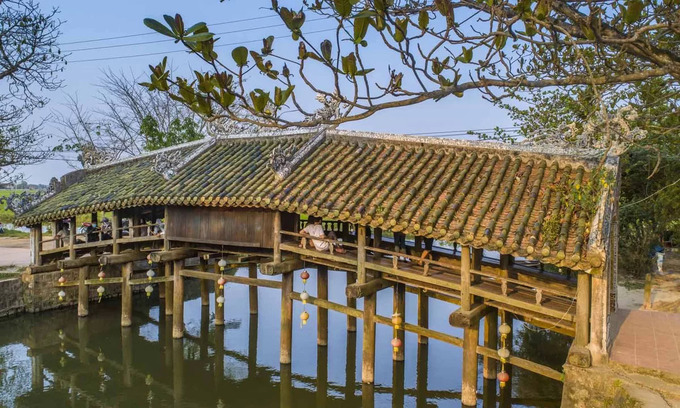 A night market will open on the Thanh Toan Bridge, a tourism magnet in Hue, at 7 p.m. on every 16th day of the lunar month.

The market will officially open to tourists Friday, August 16, with several cultural entertainments including bai choi, a traditional folk singing game in the central region, an exhibition of ancient lifestyles and farming practices, besides food pavilions.

“The bridge has been a popular tourism destination in the daytime but there are no nighttime activities there,” said Nguyen Van Phuc, Deputy Director of Thua Thien-Hue Tourism Department. “The launch of the night market aims to diversify tourism products and services in Hue.”

The department said 200-300 foreigners visit the bridge every day, apart from many locals.

The tile-roofed wooden bridge, 18 m long and nearly 6 m wide, is located about 7 km to the east of Hue Town in Thuy Thanh Commune, Huong Thuy District, Thua Thien-Hue Province. It is one of the oldest bridges in the country. It links two banks of what used to be a river running through Thanh Toan Village.

Built in the 18th century, the ornate bridge was reportedly initiated and funded by Tran Thi Dao, the wife of a high-ranking mandarin in the court of Emperor Le Hien Tong (1740-1786).

It is also said that she was a descendant of a founder of Thanh Toan Village. Her act of charity earned appreciation from the emperor in the form of tax exemption for the village. Later, an altar for Dao was established on the bridge in her memory.

The bridge was recognized as a National Relic Site in 1990, and suffered serious deterioration over the years, prompting local officials to invest nearly VND13 billion ($558,000) to restore it by strengthening its foundation, restoring its structure using original materials and improving its lighting.

Hue, the capital of Thua Thien-Hue Province, stands out from other parts of the country with its Imperial Citadel and royal tombs.

Thua Thien-Hue received more than 4.3 million visitors last year, an increase of 14 percent over the same period of 2017, 2.2 million are foreigners. Visitors from South Korea made up the largest group, accounting for a third of the total foreign visitors.