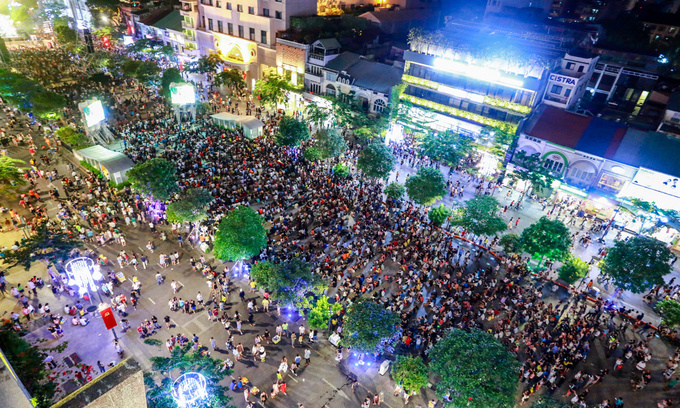 The city’s Department of Zoning and Architecture said it will increase greenery in and around the Ho Chi Minh Statue Park in front of the City Hall by planting more trees and flower gardens.

This will be part of efforts to give a facelift to the landscape of the broad Nguyen Hue Boulevard on which a large strip in the middle was made an exclusively pedestrian zone in April 2015. The place is now a popular tourist attraction.

City Chairman Nguyen Thanh Phong said it was necessary to take advantage of spaces in front of restaurants and hotels on the pedestrian street to serve art performances and allow food stalls to meet the growing demand of locals and foreign tourists.

He said advertising billboards with foreign languages bigger than Vietnamese language boards will be removed. “Local authorities have to crack down on street vendors who harass foreign visitors.”

Street vending on the street was banned in April 2016, but people with baskets selling snacks and toys can still be found.

Work on a lotus-shaped water fountain is expected to be completed this month at the intersection of Nguyen Hue and Le Loi streets, which would become a key crossroad since it lies at a confluence of rapidly rising constructions, malls and other commercial activities.

Nguyen Hue, which runs from the City Hall to Ton Duc Thang Street along the Saigon River, has welcomed thousands of visitors every day since it turned pedestrian. The street gets particularly crowded during the weekends and holidays.

Saigon received more than 4.2 million foreign tourists in the first half of this year, 10 percent up from a year ago, underlining its reputation as an increasingly popular global destination.

HCMC and Hanoi were among the world’s 100 most visited travel destinations in 2018, a recent report by Euromonitor International said.