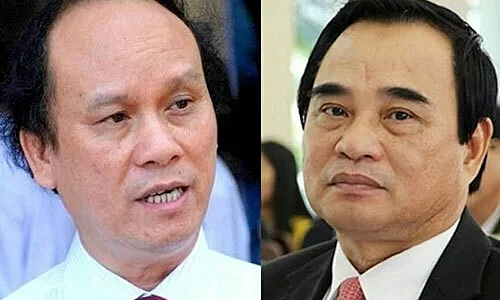 Tran Van Minh, 63, leader from 2006 to 2011, and Van Huu Chien, 64, leader from 2011 to 2014, face charges for wrongdoing in connection with land and public property administration and use, the Ministry of Public Security said in a report last week.

Its investigators found the two had signed a number of documents to transfer land use rights to Phan Van Anh Vu, a city real estate tycoon and briefly a fugitive from the law.

The probe into the two former leaders in fact began with an investigation into Vu’s dubious acquisition of public lands.

Minh allegedly enabled the tycoon to acquire the assets without going through any bidding process and often at below market prices. He then approved Vu’s sale of the lands.

In all, Vu acquired 18 public property projects and seven land lots, causing an estimated loss of more than VND22 trillion ($949 million) to the city.

According to investigators, Minh had been supported by Chien, then his deputy. The latter signed a series of decisions allowing the transfer of land and projects to Vu and setting their prices, all of them subsequently found illegal.

When he took over as chairman in 2011 he continued to authorize the sale of public assets to Vu at below market prices, causing a loss of VND14 trillion.

37 assets acquired by Vu have been seized so far.

The Ministry of Public Security is also investigating 19 other people, including Vu, in this case.

Vu, 44, used to be one of the biggest developers in Da Nang, the third largest city in Vietnam after Hanoi and Ho Chi Minh City.

He also ran businesses in HCMC and manipulated public land prices there. Several former HCMC officials are also being investigated for their role in Vu’s violations.

The biggest casualties in the case so far are former deputy public security ministers Bui Van Thanh, 60, and Tran Viet Tan, 64, who were imprisoned last January for “dereliction of responsibility, causing serious consequences.”