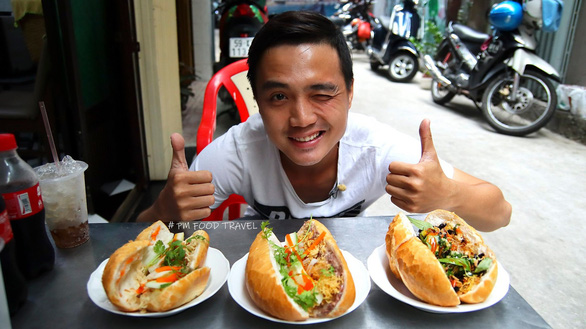 A Vietnamese freelance actor teamed up with his best friend to initiate a YouTube channel to give hilarious but honest reviews about trendy street food among the youth in Ho Chi Minh City.

Gia Phu and Trong Dien, who prefers to be called Meo (Cat), are co-founders of ‘PM Food Travel’, a YouTube channel featuring different kinds of street food around Saigon, the former name of Ho Chi Minh City, and remarks on them to satisfy food lovers in Vietnam and all over the world.

‘PM Food Travel’ distinguished from others from the intro song, based on famous Vietnamese children’s series soundtrack of Kinh Van Hoa to Gia Phu’s attractive style of talking as well as familiar types of street food they chose to review, which remind viewers of their childhood and their adaptations.

Phu said that the two of them had different ability for acting and filming videos, but both shared the ultimate love for traveling and exploring national and international cuisines, especially street food.

“What can I say? Great minds think alike,” he recalled the reason they decided to cooperate to become YouTubers.

Phu always tried his best to provide basic information from the origin, location and interesting facts about the dish while Meo set his heart and soul on producing best quality videos from visual to sound effect.

What captured the heart of viewers were friendly conversations between Gia Phu and street vendors in each video to explore more details about the dish as well as extraordinary things in it.

“We want viewers to feel as if they were talking to the vendor themselves instead of just listening to my reviewing,” said the owner of ‘PM Food Travel’.

He also shared that they tried their best to give honest and contributive reviews to build the trust among local followers and promote Vietnamese cuisine to foreign viewers without affecting the vendor’s feeling or their manufacture as quality was always their priority in work.

“Quality, affordable price range and uniqueness are main factors that contribute a lot to our products,” said Meo about their work regime.

Gia Phu said that YouTuber was a flexible job in which they could manage to do other things and take proper rest, but the pressure was finding new ideas to maintain the quality of their videos instead of producing lame and boring old stuff all over again.