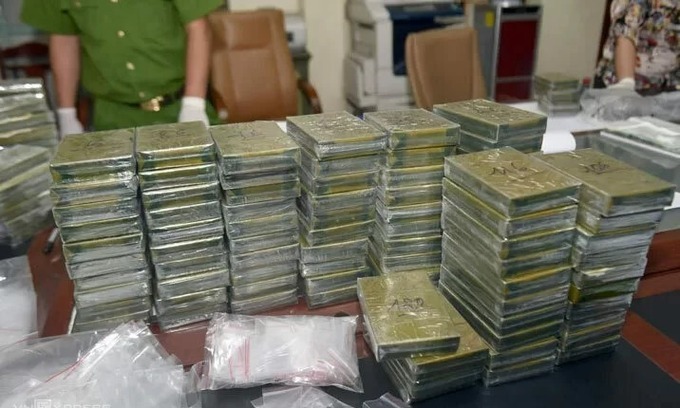 Over 39 kilos of heroin seized from a car in Thai Nguyen Province in northern Vietnam are held at a police station, August 7, 2019. Photo by VnExpress/Bao Ngoc.

Three men, one Lao and two Vietnamese, were arrested near Hanoi Wednesday while transporting 39.6 kilos (87 pounds) of heroin.

Neng Vavue Nordouda of Laos and two Vietnamese men, Vu A Thai and Vu A So, were traveling in a car on the Thai Nguyen- Cho Moi Expressway, one and half hour drive north of Hanoi, when they were stopped by local police.

Police checked the vehicle and found heroin hidden under its floor and inside its door.

Expanding the investigation, the anti-drug trafficking police forces arrested two other men and are looking for other ring members.

Drug trafficking and drug abuse have continued in Vietnam despite the country having some of the world’s toughest drug laws.

Those convicted of possessing or smuggling more than 600 grams of heroin or more than 2.5 kilograms of methamphetamine face the death penalty.

The production or sale of 100 grams of heroin or 300 grams of other illegal narcotics is also punishable by death.

Vietnam is a key trafficking hub for narcotics around the Golden Triangle, an intersection of China, Laos, Thailand, and Myanmar and the world’s second largest drug producing region.