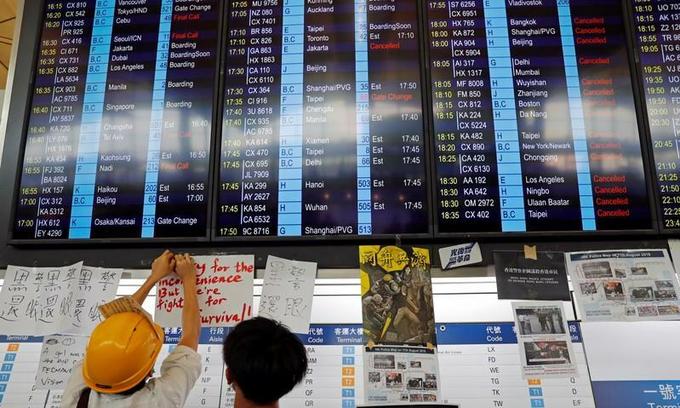 An information screen showing cancelled flights is pictured at Hong Kong International Airport as anti-extradition bill protesters attend a mass demonstration after a woman was shot in the eye during a protest in Hong Kong on August 12, 2019. Photo by Reuters/Tyrone Siu.

Vietnamese carriers were forced to cancel or reschedule Tuesday’s flights as mass protests brought Hong Kong airport to a standstill.

One of the world’s busiest aviation hubs, which handles around 200,000 passengers a day, struggled to resume Tuesday morning after a rally by thousands of protesters triggered an unprecedented shutdown. Hundreds of flights were canceled.

The protests, which began as opposition to a now-suspended bill that would have allowed suspects’ extradition to mainland China, but have swelled into wider calls for democracy, also prompted flight cancelations and delays by carriers based in Hong Kong.

National flag carrier Vietnam Airlines said it had delayed flights VN594 and VN595 between HCMC and Hong Kong both by seven hours and 40 minutes from their original schedules. Other flights will be operated as planned.

The airline advised passengers departing from Hong Kong International Airport to be present at least three hours before their departure time.

Budget airline Jetstar Pacific canceled two flights BL160 and BL161 on the Hanoi-Hong Kong and Da Nang-Hong Kong routes respectively. Passengers affected by the canceled flights will be accommodated on other flights on the same routes if they wish, the carrier said.

All airlines recommended that passengers who planned to travel by air between Vietnam and Hong Kong should stay updated on the latest news and notifications to arrange their travel plans accordingly.

All flights in and out of Hong Kong were cancelled Monday after thousands of protesters flooded the city’s airport to denounce police violence, AFP reported.

The abrupt shutdown at one of the world’s busiest hubs came as the Chinese government signaled its rising anger at the protesters, denouncing some of the demonstrations as “terrorism”.

According to Hong Kong police, more than 5,000 protesters gathered at the airport on Monday.

Airport authorities had allowed demonstrators to gather in the arrival halls, but police said some protesters went into the departure halls, disturbing passengers.

The increasingly violent protests have plunged Chinese-ruled Hong Kong into its most serious crisis in decades, presented a serious challenge to Beijing.