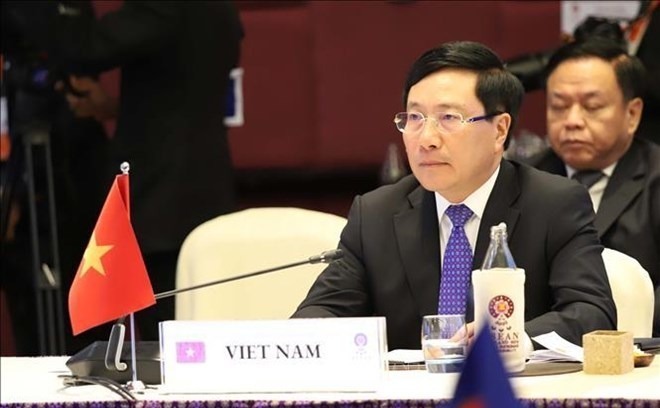 “I found it inspiring that Vietnam had the courage to name and shame China during the ASEAN Foreign Ministers’ Meeting,” Derek Grossman, a senior defense analyst at the RAND Corporation, an American nonprofit global policy thinktank that focuses on national security policy and Indo-Pacific security issues, told VnExpress.

Minh, Vietnam’s Deputy Prime Minister and Minister of Foreign Affairs, on July 31 denounced China’s activities in the East Sea at the ASEAN meeting, calling them “illegal” and “serious violations” of Vietnam’s sovereignty and jurisdiction rights.

The 52nd ASEAN Foreign Ministers’ Meeting was held July 29 to August 3 in Bangkok, Thailand, which is the current ASEAN chair.

Minh said unilateral activities by China had violated the sovereignty and legal interests of coastal stakeholders, and reasserted that Vietnam has full historical and legal basis to assert its sovereignty over the Paracel (Hoang Sa) and Spratly (Truong Sa) Islands.

Concerns over issues in the South China Sea, which Vietnam calls East Sea, cast a shadow over the meeting, particularly with China sending oil survey ship Haiyang Dizhi 8 and its escorts to Vietnamese waters near the Vanguard Bank in early July.

Minh suggested that the ASEAN maintain its solidarity and speak in a common voice, reaffirm the principles and commitments to peace and stability, call for restraint, and condemn all unilateral actions that undermine the process of regional dialogue and cooperation, hinder the legitimate economic activity of coastal countries and the attempts to build an effective, substantive COC.

Following his statement, ASEAN foreign ministers said in a joint communique issued the same day, reaffirming the need to avoid actions that may further complicate the situation in the South China Sea.

Grossman said: “The first few Ministry of Foreign Affairs statements were quite generic, but in the last two weeks, this changed for the better by specifically pointing to China’s assertive behavior.”

“The statements of Deputy Prime Minister and Foreign Minister Pham Binh Minh at the meeting were very direct and sincere, based on an amicable and collaborative attitude, so they received support from many countries,” Dung told the media, elaborating on the results of the ASEAN meeting.

Paul Chambers, Director of Research and Lecturer at the Institute of Southeast Asian Affairs, Faculty of Political Science, Chiang Mai University in Thailand, said growing frustration with Chinese actions near Vanguard Bank and the South China Sea as a whole in general was reflected in the statements of many countries attending the ASEAN conference in Bangkok, including U.S. Secretary of State Mike Pompeo.

“The continuing stand-off between Vietnam and China over Vanguard Bank has the potential to increasingly unite ASEAN member states and most ASEAN dialogue partners against Chinese provocations there,” Chambers said.

“China’s threats and use of force in the region has succeeded in creating fear and enmity towards it among most of ASEAN,” he added.

Pompeo spoke out against Chinese “coercion” of Southeast Asian neighbors in disputes over the South China Sea, which Vietnam calls the East Sea, and its dam-building on the Mekong River.

Grossman said he was not surprised that China had not withdrawn its ships because China claims Vanguard Bank as part of its so-called “nine-dash line” and it now has the capabilities, including its navy, coast guard forces as well as the People’s Armed Forces Maritime Militia, to enforce its claims.

Beijing has also mostly completed land reclamation and military infrastructure construction on Woody Island in the Paracel Islands and on its three main possessions in the Spratly Islands – Fiery Cross, Mischief, and Subi Reefs.

“The idea is probably to outlast Hanoi’s ability to deploy forces to Vanguard. If that fails, then Beijing could resort to ramming tactics that were successful during the May 2014 oil rig standoff,” Grossman warned.

Lucio Blanco Pitlo III, lecturer at the Chinese Studies Program at Ateneo de Manila University in the Philipines, said Vietnam and the U.S. considered Chinese actions as interference in Vietnam’s energy activities in the area while ASEAN made references to “serious incidents” in the South China Sea which eroded trust and confidence and may undermine regional peace, security and stability, but it stopped short of naming or condemning China.

He felt that Vietnam and China, despite their official statements, seem to be downplaying the incident, and the two are engaged in talks to manage the Vanguard Bank incident.

“Progress in ongoing COC negotiations and violence that erupted the handling of a similar incident in 2014 may have prompted both sides to approach the issue with more caution and prudence,” he said.

On May 1, 2014 the Chinese brought an oil rig, Haiyang Shiyou 981, and installed it in the waters off Hoang Sa. For days after that, Chinese ships chased after, fired water cannons at and rammed Vietnamese fishing vessels near Hoang Sa.

Experts had commented on the new standoff that China was trying to turn Vietnamese territory into a disputed area to advance its superpower plans, but that such actions could erode bilateral and regional trust and affect domestic opinion.

On the sidelines of the ASEAN Ministers’ Meeting in Bangkok last Thursday, Deputy PM Minh told Chinese State Councilor and Foreign Minister Wang Yi that Vietnam and China need to maintain peace, stability and control conflicts well, without adding to the tension, and resolve disputes with peaceful measures.