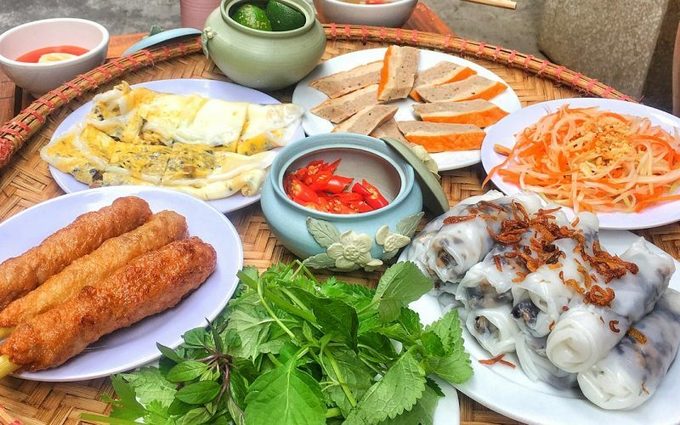 Steamed rice roll or banh cuon is a favorite of many Hanoians. Photo by Shutterstock/Hoang Huy.

Vietnam’s capital is among seven famous Asian “food paradises” mentioned in the newspaper’s listing of 20 best food tours in the world. The six others are Bangkok, Tokyo, Hong Kong, Shanghai, Vientiane and Mumbai.

The Guardian said “the fascinating mix of Vietnamese cuisine with Chinese, French and American influences is part of Hanoi’s considerable charms.”

“Hanoi is where one can take to the streets and eat like a local,” it said.

To quench your thirst, try a cup of dracontomelon juice which can be found at many streets corner in Hanoi; or cool down with a dessert of chewy black fermented sticky rice with yoghurt, the newspaper added.

The Guardian’s list also covers many cities in Europe and South America, including Lisbon in Portugal, Barcelona in Spain, Copenhagen in Denmark and Lima in Peru.

U.S. news site Business Insider last October published a list of 50 must-try attractions, foods and experiences in Asia, and among them was “a steamy bowl of pho in Hanoi”.

Hanoi received around 3.3 million visitors in the first six months of this year, up 10.6 percent year-on-year.

Last month, city officials signed a memorandum of understanding with CNN to continue its tourism promotion campaign on social media and air documentaries on the popular cable news network for the 2019-2024 period.

Hanoi was recently named among top 15 destinations in the world by TripAdvisor travelers.