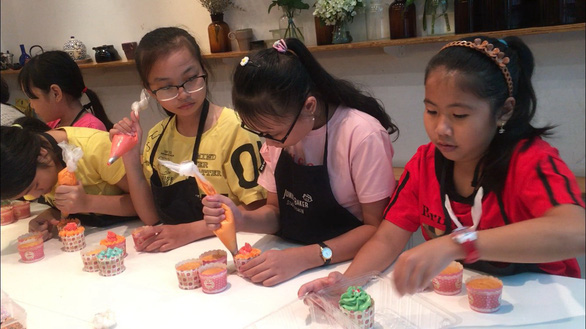 Vietnamese parents are trading in cram classes and mobile devices for summer courses that offer their children a chance to experience what the true joys of summer.

The excitement of baking

On a Sunday evening at the Star Kitchen cooking class in District 1, children aged six to ten gathered in a room filled to the brim with cookware, excitedly awaiting their chance to bake and decorate cupcakes.

During the lesson, Minatha, the cooking instructor, guided students through baking and decorating four delicious cupcakes to take home to show off to their family.

A typical class at Star Kitchen involves ten students, both male and female, working in pairs.

“Have you ever eaten cupcakes?” the instructor asked. “Well, today, we are going to get the chance to make them ourselves! We will need eggs, butter, flour, powdered sugar, baking powder, salt, and vanilla.”

Newcomers, especially the younger kids, are hesitant to participate at first because they are unfamiliar with the variety of kitchenware and ingredients.

After an hour of ‘getting to know’ the butter, flour and sugar, the children waited excitedly for their cupcakes to bake in the oven.

As each batch of cupcakes was taken out of the oven, the smell of vanilla saturated the room. The site of the children holding their finished cake, eyes sparking and smiles bright, was truly heart stirring.

Minatha said that the cupcake baking class is only one of the 12 summer recipes, including some Japanese dishes, that kids can learn at Star Kitchen for just VND300,000 (US$14) per session.

Khanh Ha, a seven-year-old from District 10, could not hide her shyness during her first time entering the kitchen, but as the class progressed, she became acquainted with her fellow learners and intently followed each of Minatha’s directions.

Nguyen Thanh Thao, Khanh Ha’s mother, shared that her daughter loves watching baking tutorials so much that it inspired her to sign her daughter up for the course.

Thao also shared that she wants her daughter to have an enjoyable summer where she is able to discover her own hobbies.

Ten-year-old Tran Ngoc Van Anh, is another diligent young baker in the course who spends her free time watching baking tutorials on YouTube.  Her dream, she says, is to learn how to execute different types of cake.

Tran Ngoc Loan, from District 6, takes not only her ten-year-old son Do Thanh Toan to Minatha’s class each Sunday, but also two of her neighbor’s children. Loan laughed at her role as a ‘designated nanny,’ saying she takes the children to class by taxi and patiently waits until the children are finished.

“The kids love going to these kinds of things,” Loan shared.

Loan also explained that due to such a busy school year, summer is the only time for children to experience new things.

“It’s a lot better than staying at home staring at the TV and iPad all day,” she said.

Taking children to art lessons is also a great way for them to relieve stress during the summer. It also gives parents an opportunity to discover their kids’ talents and pathway to the future.

During rehearsal, Dung kept the kids’ attention with humor and energetic dance moves.

According to Dung, she choreographs the dance moves based on the different age groups in each class, including basic movements that will improve their flexibility.

More importantly, Dung also helps boost their confidence by having them perform in front of an audience.

Impressed by the aptitude of the younger kids in his class, Thai Dang Gia An, a nine-year-old from Go Vap District, acquainted himself with the dance group comprised of children three years younger than him.

Outside school hours, An rehearses and performs with a dance company. He aspires to chase his dreams of performance, so this summer An has registered for this class to see if he has “what it takes to pursue dance, performance and music.”

The class also gets a lot attention from parents. Some even travel long distances to watch their kids at work.

As she waits for her seven-year-old son Ho Nguyen Huu Phong, Ho Thi Dao explains that her child has always been interested in art and was simply trying it out to see if it is something he was going to follow.

In the meantime, Hong Van Drama Theater, run by famed artist Hong Van, also offers an acting class for children during the summer.

“This is the first time we have organized something for children in Ho Chi Minh City,” said Ho Minh Tan, one of the actors who manages the classes.

The course will run for three months and alternate between dance, acting, and music. The theater is also considering running a course during the school year. How to Spend One Week in the Central Highlands of Vietnam