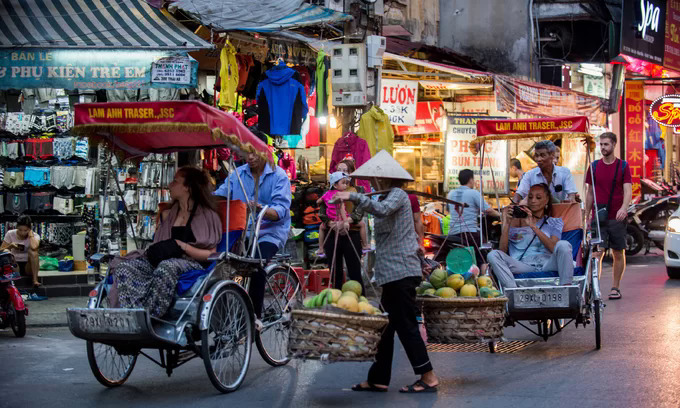 Hanoi received a record 16.75 million tourists in the first seven months of the year, up 9.2 percent from a year ago. Of these, foreign arrivals reached 3.7 million, an 8.9 percent increase.

The robust growth in arrivals helped expand tourism revenues by 28.8 year-on-year to VND57.7 trillion, the highest in four years, according to the city’s Department of Tourism.

Hanoi currently has 3,499 lodging facilities including hotels, condo-hotels, and hostels with a total of 60,812 rooms. The number of stay-over foreign tourists in the city amounted to around 2.6 million in the first seven months of the year, up 6.2 percent, mainly from South Korea, China and Japan. the department said.

A series of major tourism events since early this year have put the capital in the international spotlight, one of them being the historic second summit between U.S. President Donald Trump and North Korean leader Kim Jong-un last February.

Last month, Hanoi celebrated 20 years of it being granted the “City for Peace” title by UNESCO, recognizing its contributions to the struggle for peace, its efforts to promote equality in the community, protect the environment, promote culture and education and care for younger generations.

Over the past years, Hanoi has increased efforts to give the local tourism industry a boost and make the capital a leading tourism destination in Southeast Asia.

In 2016, Hanoi allowed restaurants and bars in the central district of Hoan Kiem to remain open until 2 a.m. from Friday to Sunday, boosting its nightlife appeal. It also opened a pedestrian-exclusive zone around the iconic Hoan Kiem (Sword) Lake during the weekends and installed free public wi-fi hot spots in many outdoor spaces and street corners.

2018 was a successful year for Hanoi’s tourism sector with a record high 5.74 million foreign visitors, up 16 percent year-on-year. A survey by its tourism department found foreign visitors spent $92-114 a day on average last year.

Hanoi officials last April signed a memorandum of understanding with CNN to continue its tourism promotion campaign on social media and to air documentaries on the popular cable news network in the 2019-2024 period.

Saigon and Hanoi were among the world’s 100 most visited travel destinations in 2018, a Euromonitor International report said.

The capital city was named among the top 15 destinations in the world by TripAdvisor travelers.

The city is also on top of the list of most affordable destinations in the world, with backpackers needing just $18.29 a day in Hanoi, according to the 2019 Backpacker Index formulated by Price of Travel, the world’s largest database of travel costs.