With no roof over his head, a Saigon scrap vendor makes a home for dogs saved from being eaten. 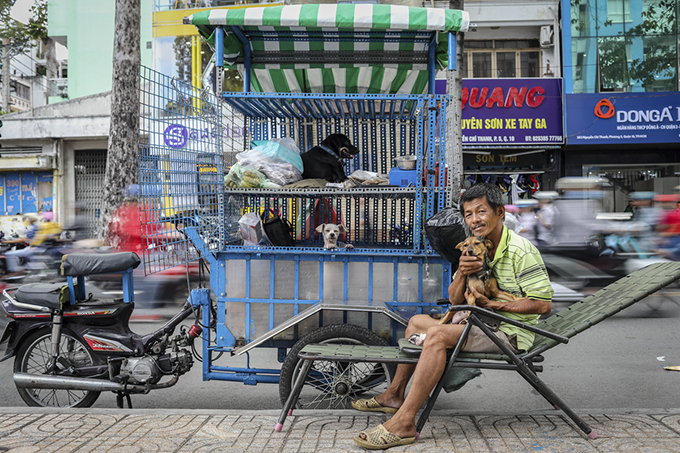 Vo Van Thanh has been doing this for more than 20 years. He saves canines from a dog’s life.

Scrap vendors like Thanh moving around streets with their carts is not a strange sight in Saigon, but unlike others, he has a pack of dogs with him.

People wondering about the man with so many dogs soon get the message from a note on his modified tricycle that says: “Not for sale. Dogs are friends, not food”. 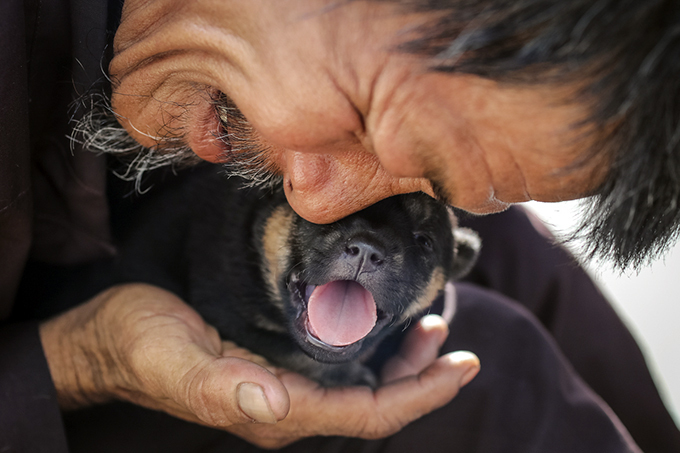 Thanh, 52, started to rescue dogs and raise them in 1995-1996 when he was a worker at construction sites in HCMC and saw dogs captured in cages, waiting to be killed at slaughtering houses.

As a native of Binh Duong Province, which neighbors HCMC, Thanh used to have a family, but “troubles came and my wife left. My two sons are both drug addicts. I was upset so I left my hometown.”

Starting a brand new life penniless in the biggest city in the country, Thanh became a scrap vendor. But his focus is less on his own livelihood than the lives of dogs he rescues from the jaws of death, i.e., the jaws of dog meat lovers. 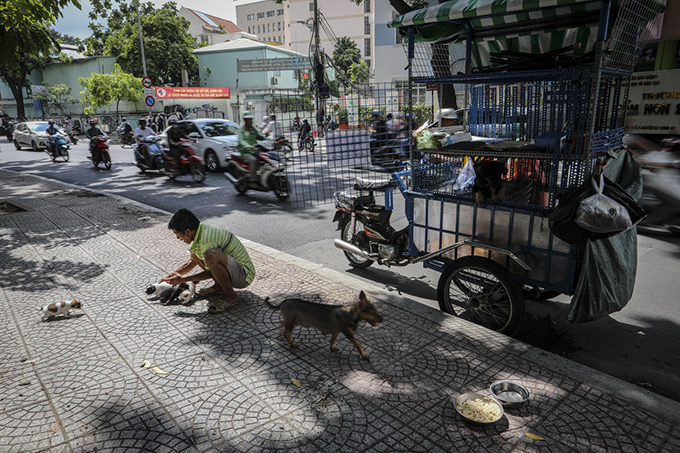 He says few dogs that he has raised have been stolen as they slept with him on the sidewalk.

“Later, I had this tricycle [with an attached cage] for them and it feels more secure. I never sell my dogs. To those who really want them as pets, I am willing to give them away. But not for any other reason.”

In many parts of Vietnam, dogs are treated as food. Official data says the Vietnamese market consumes an estimated five million dogs a year, second only to China, which consumes roughly 20 million. 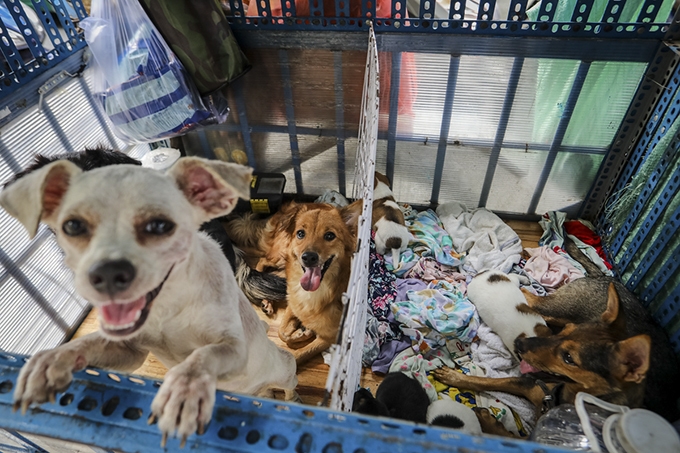 Thanh covers the mobile house he makes for his four-legged friends with canvas to make sure that they are well protected. He also has all necessary tools to take care of the dogs.

“I used a bicycle at first but then a charity group gifted me this motorbike, and so I made this tricycle.” 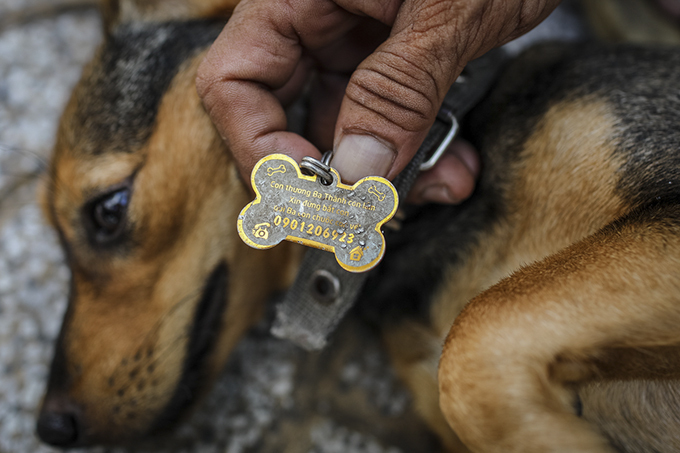 Thanh is illiterate, but the fear that someone could steal them has given his dogs a collar each, saying: “I love my Daddy Thanh. Please don’t take me away from him!”; and along with it, Thanh’s mobile number.

He currently has 11 dogs with him, including some puppies less than a month old. 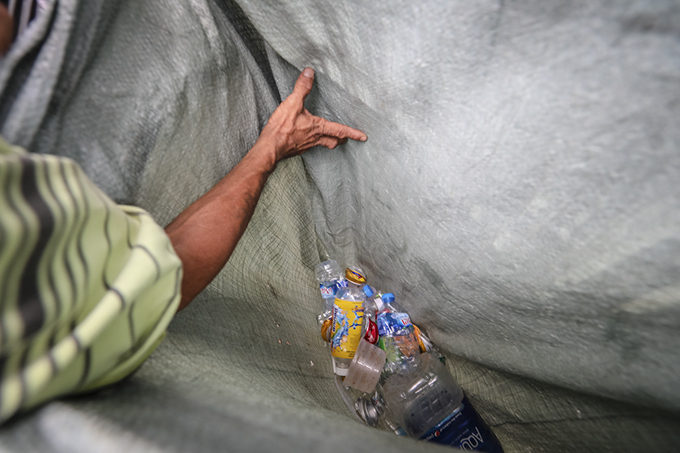 Than shows his scrap collection on a day when the pickings were slim because some of his dogs were sick. 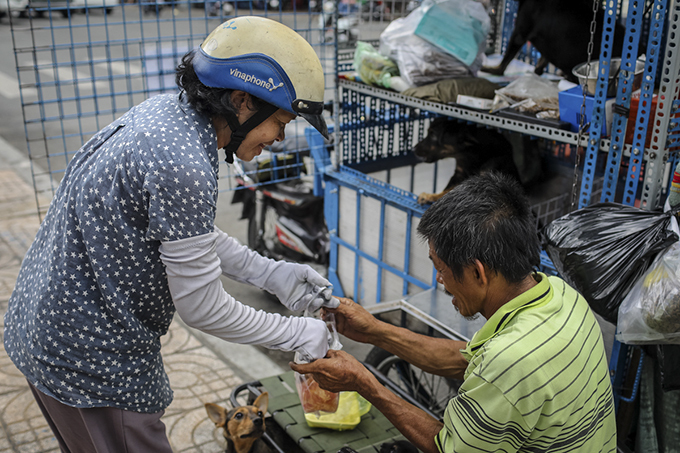 Thanh rues that his low income is not enough to raise so many dogs, but, luckily, he gets help from other people who give him cash or food for the dogs. Some have asked him to give them dogs as pets and he has agreed. 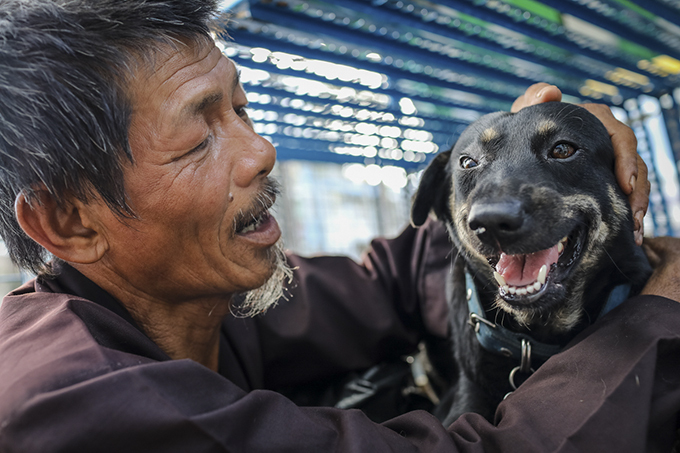 Two-year-old Den (Blackie), is the one that Thanh has the most poignant memories about. “I bought his mom from a slaughtering house. She was a smart girl and she never went anywhere far from me. But four days after giving birth to Den , she was stolen. I really love Den because he has no mother and has a defective leg.” 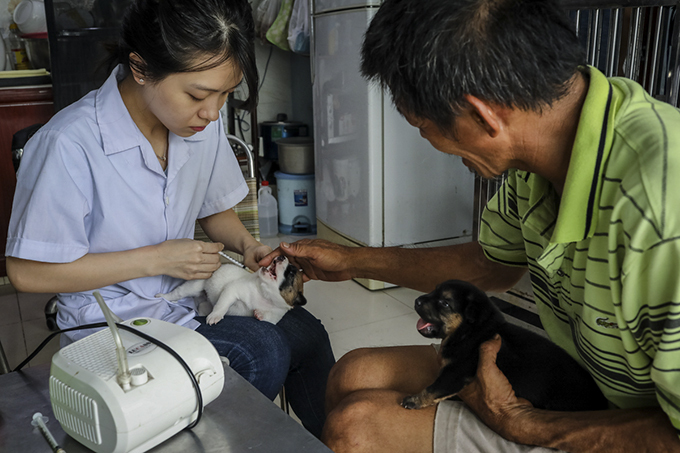 Thanh takes his puppies to a hospital in District 1 for being treated for rhinitis.

“Thanh really loves dogs. There have been nights when they were sick that he would call veterinarians to help (even at odd hours). He’s willing to skip his meals so that he can buy food for the dogs,” said Van Thanh, a vet at the hospital. 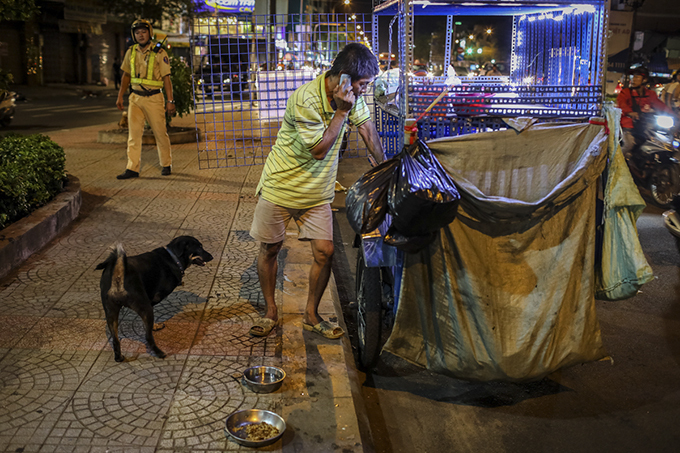 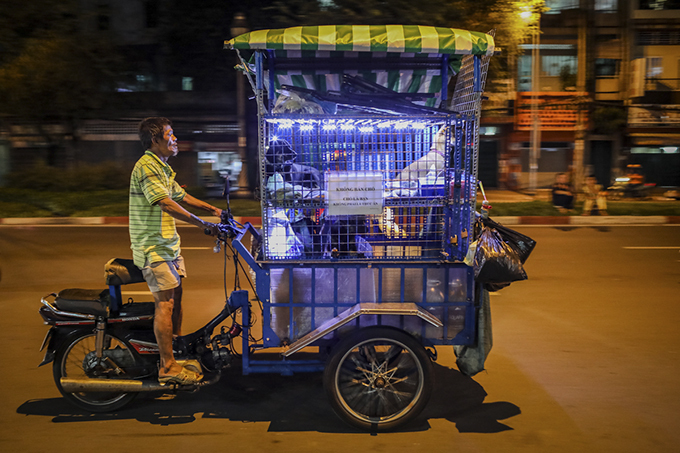 When night falls, he takes the dog back to their sleeping spot. The light inside the dogs’ cage comes from a battery that he gets recharged by asking local residents to help as he moves around, collecting scrap.

Thanh spends every night on a camp bed on the sidewalk at the corner of Hong Bang and Nguyen Thi Nho streets in District 5.

He sighs: “Sometimes, it just feels so sad. All I wish for is a small hut to stay with them and take care of them when the weather is bad.”