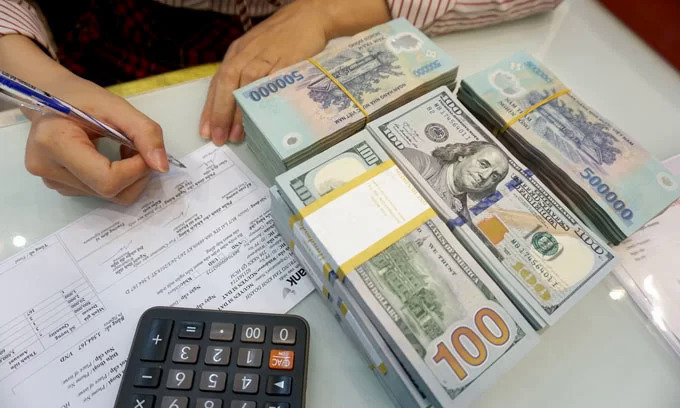 Several securities companies forecast that the dong/dollar exchange rate is unlikely to change by more than 2-3 percent. Photo by VnExpress/Anh Tu.

Vietnam has room to keep its currency strong until year-end despite pressures from a rising dollar and falling yuan, analysts said.

On Friday the US Dollar Index (DXY), a measure of the greenback’s strength against a basket of currencies, crossed the 98-point mark in the last three sessions, its highest level since May 2017 and almost 3 percent up since June-end.

The Chinese yuan fell for the sixth consecutive session to 7.0931 to the dollar, the lowest level since the 2008 global financial crisis, and edging closer to the crucial 7.1 mark.

Global markets plunged when China allowed the yuan to fall below the key 7 threshold in early August, and investors piled into gold, safe-haven Japanese yen and bonds amid heightened worries of a global currency war, Reuters reported.

But the recent volatility in the global market does not seem to have a big impact on Vietnam, Harry Loh, General Director of the Singapore-owned United Overseas Bank Vietnam, said.

Given the State Bank of Vietnam’s (SBV) clear policy orientation to maintain stability and liquidity in the forex market since the beginning of the year, it will likely keep the dong/dollar trading band at around 2 percent for this year, and so overnight shocks in the market would be unlikely, said Harry Loh.

Several securities companies had also forecast in recent reports that the dong/dollar exchange rate was unlikely to change by more than 2-3 percent, a band Vietnam has maintained in recent years even with global pressures.

According to Bao Viet Securities (BVSC), by the end of July the exchange rate had not changed much since the end of last year, and so the SBV has “sufficiently large room” to manipulate the dong.

The pressure from a rising dollar could be kept at bay until this year because Vietnam has abundant foreign currency reserves, it said.

“Year-end mergers and acquisitions such as BIDV selling a 15 percent stake to South Korea’s KEB Hana Bank, plans by Vietcombank to sell a 6.5 percent stake and MBBank selling 7.5 percent to foreign investors is expected to bring a lot of foreign currency into Vietnam,” BVSC said. It expected the value of these M&A deals to reach $2 billion.

According to Viet Dragon Securities, because FDI prospects are “excellent” this year, foreign exchange reserves will increase, meaning the SBV will have “significant room” to make currency interventions.

Foreign investment in Vietnam is expected to top $20 billion this year, a record high, according to Singapore’s United Overseas Bank (UOB).

On Friday the SBV set the daily reference rate for the dollar at VND23,127. This meant the dong had depreciated by 1.98 percent from a year ago and 1.32 percent since the beginning of this year.