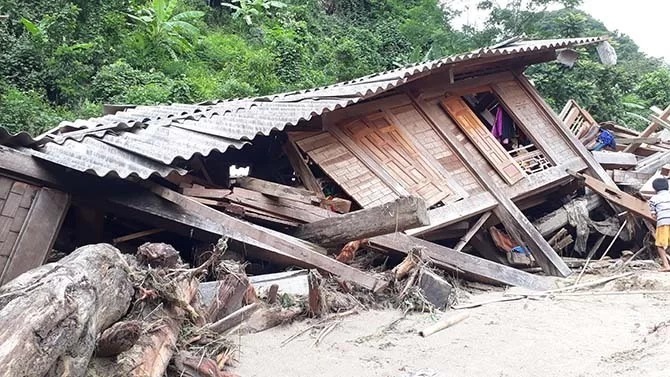 A house is collapsed by flooding triggered by Storm Wipha in Thanh Hoa Province. Photo by VnExpress/Le Hoang.

Storm Wipha impacts have so far left nine people dead, 11 missing and a trail of destroyed roads, houses and crops.

The heaviest hit locality has been the north central province of Thanh Hoa, which has lost at least five people and reported 10 others missing, according to the latest information from the Central Steering Committee on Natural Disaster Prevention and Control.

The northern mountainous provinces of Bac Kan, Dien Bien and Lao Cai have reported one death each.

The other death was in the northern province of Phu Tho. Nguyen Xuan Viet, a local official, said the body of a 33-year-old man was found Monday morning. He was swept away by flashfloods while he was pulling out fishing nets on a river.

Although Wipha, the third storm to hit the Vietnamese waters so far this year, devolved into a tropical depression Saturday morning after making landfall in the northern coast on Friday night, the heavy rains that it brought triggered flooding, landslides and rockslides in northern and north-central provinces.

Local officials said the flooding swept away 59 houses and heavily damaged 200 others in Thanh Hoa, destroyed a large area of agricultural crops and caused landslides on several roads.

Initial damage has been estimated at VND136 billion ($5.8 million).

More than 800 people, including police officers, army recruits and volunteers have been mobilized to flood-prone areas in Thanh Hoa to look for those still missing and help local residents overcome the aftermath of the floods.

Weather monitoring data shows that between Friday and Sunday, storm/tropical depression Wipha had triggered heavy rainfall across northern and north central provinces. The total rainfall was measured at over 380 mm in Quang Ninh, over 420 mm in Vinh Phuc, 400 mm in Lang Son, 380 mm in Ha Nam and over 500 mm in Thanh Hoa. Rainfall of 180 mm a day is considered heavy.

Between August 10 and 30, at least one to two low-pressure systems, tropical depressions or tropical storms are forecast to get active in the East Sea, known internationally as the South China Sea, and these could affect Vietnam, weather experts have cautioned. Three to four heavy downpours are also forecast to affect northern and north central provinces during this period.

Vietnam experiences a storm season between July and October. There were nine storms last year and four are expected this year.