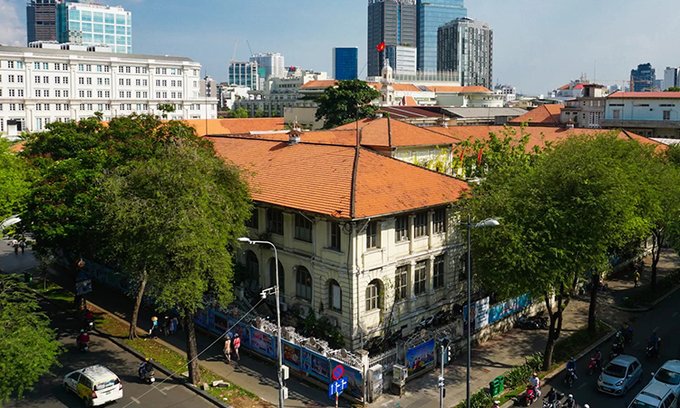 The 130-year-old building is the second oldest in Saigon. Photo by VnExpress/Quynh Tran.

The HCMC Department of Planning and Architecture has suggested that foreign experts are hired to help preserve a 130-year-old French building in downtown Saigon.

The building is currently the headquarters of the city’s Department of Information and Communications, located at 59-61 Ly Tu Trong Street in District 1.

It was slated for demolition under a renovation plan, but vociferous objections by city residents have forced a rethink.

The planning department has proposed that the city’s People’s Committee invites international experts to make detailed plans on preserving the old building. The experts, with vast experience in different approaches and treatment of historical monuments, can suggest the level of preservation, from preserving the entire structure to maintaining its façade or creating a new building based on the old one, it said.

Before making this proposal, the department had hosted a conference to gather expert opinions from all over the country. But few domestic specialists could provide adequate technical assistance for the preservation.

Under an expansion proposal, the building could be destroyed to give space for a bigger administrative center, said Nguyen Thanh Nha, director of the city’s Department of Planning and Architecture.

Last year, over 2,800 people signed a petition asking local authorities not to demolish the building when upgrading the city’s People’s Committee headquarters.

The building was built by the French in the 1860s, upgraded in 1890, and used for the management and operations of all civil and judicial activities during colonial times. It is the second oldest building in Saigon, after a 228-year-old house that belonged to Bishop Ba Da Loc.