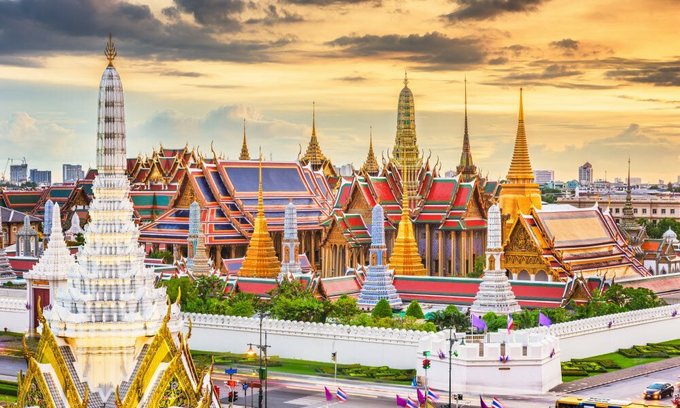 The Temple of the Emerald Buddha and Grand Palace in Thailand’s Bangkok. Photo by Shutterstock/Andy Tran.

Thailand’s capital is the most popular destination for Vietnamese choosing to travel abroad during the three-day national holiday that starts this Saturday.

Agoda, the world’s leading online accommodation reservations provider, has used bookings data for travel between August 31 and September 3 to assess the 10 most popular overseas destinations for Vietnamese travelers for the National Day (September 2) holiday.

Bangkok tops the list, followed by Singapore and Bali in Indonesia. Bali is one of the world’s most popular travel destinations, dubbed the Island of Gods and a paradise on earth with its beautiful beaches, ancient Hindu culture and vibrant nightlife.

Around one million Vietnamese came to Thailand in 2018, putting Vietnam among the kingdom’s top 10 tourism markets, according to a recent report by the Tourism Authority of Thailand.

Bangkok’s high popularity among Vietnamese holiday goers is reflected in the fact that 30 airlines have direct routes connecting Hanoi and Ho Chi Minh City with the city.

Citizens of ASEAN member nations can travel within the region without applying for a visa and stay as a tourist for a maximum of 30 days.

Increasing numbers of Vietnamese have been going abroad in recent years. Last year, 8.6 million traveled overseas, up 15 percent from a year ago.

Industry insiders said that as more Vietnamese join the middle class, they are increasingly looking outward for travel destinations. A World Bank report in 2017 said the country is seeing an increasing number of people, estimated at 1.5 million each year, join the ranks of the middle and upper classes.

“As Vietnam’s economy grows, and an increasing number of citizens join the ranks of the global middle and upper classes, more people are going to take an interest in traveling the world,” said Sean Preston, Visa’s country manager for Vietnam, Cambodia and Laos.

According to Mastercard, Vietnam has the second fastest growing outbound market in the Asia Pacific region after Myanmar, with projected annual growth of 9.5 percent between 2016 and 2021. The firm has forecast that some 7.5 million Vietnamese travelers will venture outside the country in 2021.