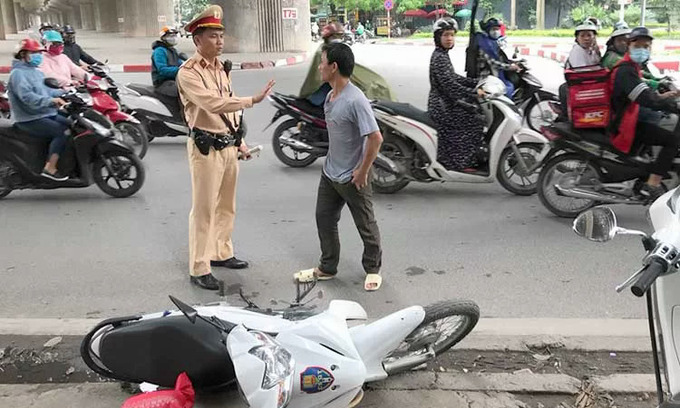 A man reacts to a traffic police officer after he and his friend were stopped for an alcohol test in Hanoi, May 9, 2019. Photo by VnExpress/Phuong Son.

Traffic police officers should be equipped with handguns and even submachine guns, the Ministry of Public Security has recommended.

It made the proposal in a draft of regulations related to the powers and duties of the traffic police that is being drawn up.

Vu Do Anh Dung, the head of the ministry’s Traffic Police Department, said traffic police officers need guns since drug crimes have escalated in recent times and more criminals are using guns against them when chased on the streets.

“Once the proposal is approved, the ministry will analyze the situation to decide what weapons to give the traffic police.”

Major General Nguyen Mai Bo, member of the National Assembly’s Committee of National Defense and Security, said the traffic police are also police and therefore entitled to use weapons.

The Law on Management and Use of Weapons, Explosives and Combat Gears makes it clear what kinds of weapon the police could use, and the ministry would decide what they would, he said.

“It is regulated clearly in what situations they are allowed to fire, and if they violate the rules the punishment is really tough.”

According to the law, police can fire into the air when a subject is using weapons, explosives, force, or any other means to attack others, resist arrest, cause public disorder, and cause harm to others’ assets.

They can shoot at all types of vehicles except those belonging to diplomatic agencies, consular offices and international organizations if a subject is trying to escape or there are illegal weapons or explosives, anti-state documents, drugs, national treasures, or hostages in the vehicle.

They can shoot directly at a subject when that subject is using weapons or explosives to attack them; terrorize, attempt to kill or hold someone hostage; or threaten the safety of a building or property that is related to national security or protected.