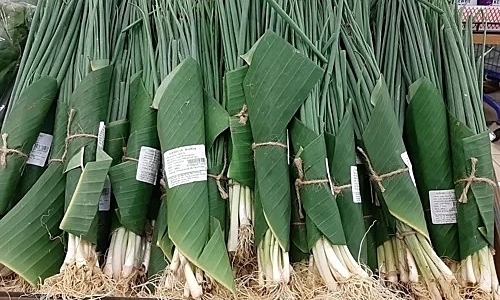 Green onions are wrapped in banana leaves at a supermarket in HCMC, instead of plastic bags as what has been done in most retail outlets in recent years. Photo by VnExpress/Nghe Nguyen.

All supermarkets, shopping malls, convenience stories and bookstores in Saigon are to replace plastic bags with environmentally friendly options by 2020.

City authorities said the move follows up on a campaign to fight against plastic waste launched in June by Prime Minister Nguyen Xuan Phuc.

Phuc called for action to achieve zero disposable plastic use in urban shops, markets and supermarkets by 2021 and extend it nationwide by 2025.

Several supermarkets in the city, which is now home to 13 million people including migrants, have already taken first steps to cut plastic by wrapping several of their products with banana leaves.

All supermarkets in the city sell reusable bags of different sizes with signboards asking customers to switch to using them.

Starting May, leading supermarket chain Saigon Co.op has stopped selling plastic straws at all of its stores and replaced them with those made with paper, rice, stainless steel, glass and other environment-friendly materials.

The HCMC administration had previously asked government employees to limit the use of bottled water, plastic bags and straws in the workplace.

It directed that government offices and agencies in the city, not to use bottled water starting August 1, including for conferences, and switch to bottles of more than 20 liters that are easier to reuse. Starting 2020, the municipal Department of Finance will not allocate funds to government agencies for buying disposable plastic products.

So far, several schools in the city have announced plans to stop using single-use water bottles and plastic straws at meetings, conferences and other events; while some public hospitals have started using recycled paper bags to pack medicines for their patients.

Bui Trong Hieu, chairman of the HCMC Urban Environment Company Limited, said earlier this year that of the 8,700 tons of trash discarded in the city daily, plastic accounts for 1,800 tons but a mere 200 tons, or 11 percent, is collected for recycling.

The recent environmentally-friendly moves by different sectors come in the wake of reports that Vietnamese produce a staggering amount of plastic waste: around 2,500 tons a day.

Vietnam has the dubious distinction of being ranked the fourth biggest polluter of oceans in the world by U.S. based non-profit environmental organization Ocean Conservancy.