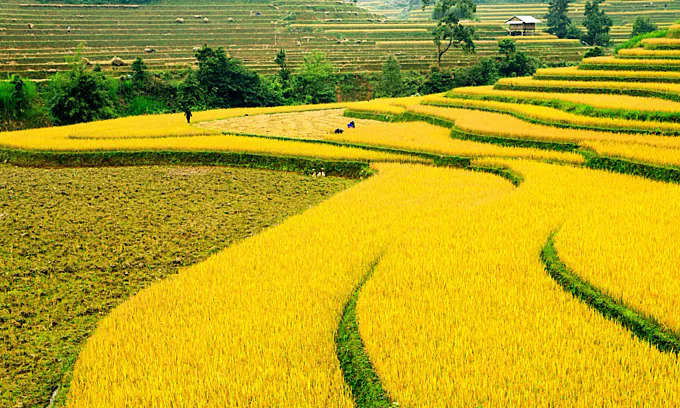 During the harvest season in October, rice paddies turn golden yellow and one of the most incredible sights in northern Vietnam. Photo by Shutterstock/Hong Dung.

The annual festival, organized by VietWings Hanoi Paragliding Club since 2013, has become the largest such event in the country.

Its timing makes the festival more popular: it coincides with the rice harvest season in Mu Cang Chai, which is said to be at its most beautiful from late September to early October, when the fields are dyed yellow.

This year around 200 local and foreign competitors are expected to take part in the festival, six times the number in its inaugural year.

The paragliders will take off from Khau Pha Mountain, one of the four most dangerous passes in Vietnam due to its foggy winding roads and steep terrain.

Khau Pha rises 1,200 meters, and will provide the contestants with the best views of the golden carpet stretching over 500 hectares in the Mu Cang Chai valley.

Visitors who love adventure can join the paragliders as passengers and ride tandem over the terrace fields, voted as one of “the most colorful places” on the planet by U.S. magazine Condé Nast Traveler.

Mu Cang Chai, around seven hours by road to the northwest of Hanoi, is at the foot of the Hoang Lien Son mountain range.

The H’Mong ethnic group started carving rice terraces into the mountains centuries ago and continue to plant the crop today.

In 2017 the terraced fields were named one of the 19 most picturesque peaks on earth by U.S. travel site Insider.