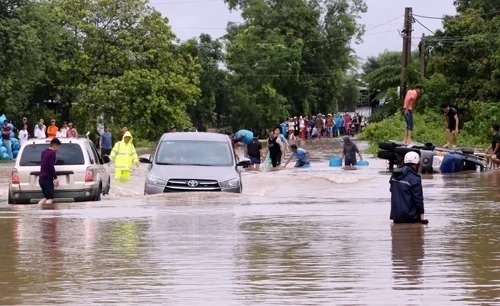 An area in Dak Lak Province of the Central Highlands is flooded. Photo by VnExpress/Tran
Hoa.

Hoang Minh Tu, 50, slipped and was swept away as he was clearing a sewer in Bao Loc Town of Lam Dong Province. Hoang Trung Tung, 65, was swept away by a flash flood as he was walking home along a stream in Dak Lak Province. The two died on Thursday.

Ro Cham Khai, 7, was swept away into a sewer to death Wednesday as he was playing in front of his home in Gia Lai Province.

Tran Van Hieu, 28, his wife and 2-year-old daughter, were buried by a landslide in Dak Nong Province Wednesday. Their bodies were found Thursday.

Several localities in the Central Highlands, including Da Lat, Da Teh, Cat Tien, Ea Sup and Buon Don, were severely flooded as a result of heavy rains or the overflowing of rivers and streams. Many families were forced to evacuate, traffic was paralyzed, roads eroded and vehicles, houses and crops submerged and damaged.

The southwestern monsoon and tropical depressions in the East Sea, internationally known as the South China Sea, would continue to cause rainfall of between 40 and 70 mm in the Central Highlands and southern Vietnam, the National Center for Hydro-Meteorological Forecasting said Thursday.

Central Highlands’ localities such as Dak Lak, Ea Sup or Buon Don should also watch out for floods and landslides, the center added.