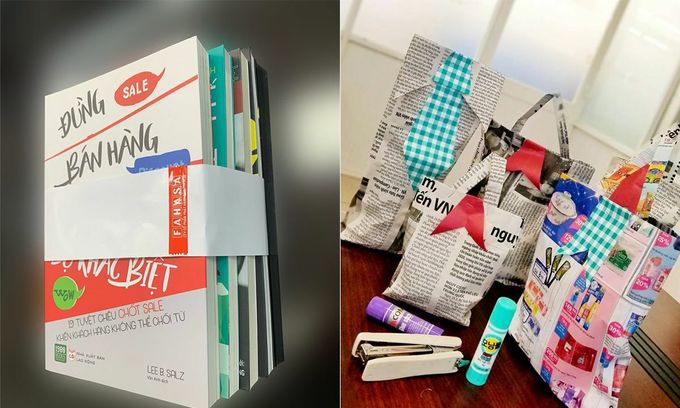 Fahasa will stop using single-use plastic next month and shift to biodegradable bags and paper wrappings.

Starting August 1, Fahasa, Vietnam’s biggest bookstore chain, will use a paper band to wrap books purchased from their shops for customers who bring their own bag, the company has recently announced on its official Facebook page.

For stationery items likes pens, pencils and cases, Fahasa will use bags and wrappers made of recycled newspapers and magazines. The recycled paper bags are part of the bookstore’s initiative launched in May.

By the end of this year, the bookstore chain expects to use 500,000 paper bags to replace 10 percent of the nylon bags that it currently uses.

The company has previously said that it aims to slowly replace nylon bags with bags made with recycled paper in the coming years and eventually manufacture bigger packages made of fabric and paper to accommodate larger items.

The bookstore chain’s move comes after PM Nguyen Xuan Phuc said last month Vietnam should strive for zero disposable plastic use in urban stores, markets and supermarkets by 2021 and for no plastic products to be used in the entire country by 2025.

Vietnam has been ranked the fourth biggest polluter of oceans in the world, behind China, Indonesia and the Philippines, according to a report on the countries polluting the oceans the most in the world by The Wall Street Journal.

A total of 1.8 million metric tons of mismanaged plastic waste came from Vietnam. China and Indonesia are the top sources of plastic bottles, bags and other rubbish clogging up global sea lanes, accounting for more than a third of plastic detritus in global waters, the report said.