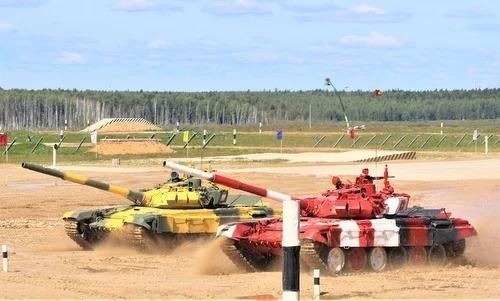 A Vietnamese tank (R) competes against a tank from Tajikistan at the International Army Games 2019 in Moscow, Russia, August 11, 2019. Photo courtesy of Vietnam People’s Army.

Vietnam’s tank crew led their group in the semifinal of the Tank Biathlon competition Sunday at the International Army Games.

They were competing against Myanmar, Uganda and Tajikistan at an arena in the suburbs of Moscow. Their tasks include obstacle runs through rivers, cliffs, bridges and minefields, as well as simulation shooting at helicopters and other tanks.

Myanmar was initially placed first in the group, finishing their performance in two hours 33 minutes and 47 seconds, having shot 11/24 targets. Vietnam was placed second at two hours 39 minutes and 34 seconds with a 14/24 shooting score.

But the Tank Biathlon’s organizing committee later found that Myanmar had violated safety protocols by discarding a stuck ammunition cartridge instead of properly dealing with it. The ensuing disqualification pushed Vietnam to first place.

The countries that will advance to the finals of the Tank Biathlon would be announced after Uzbekistan, Laos, Cuba and Kuwait finish their competition Tuesday.

The Tank Biathlon is part of the International Army Games 2019 held by Russia from August 3-17. Twenty-four countries participated in the biathlon this year. Vietnam is participating for the second time.

The Army Games this year has attracted over 6,000 military athletes in 223 teams from 39 countries from Europe, Asia, Africa, Central and Latin America.

This is the second year Vietnam has sent a delegation to the event, with 125 officers and soldiers in total.

Last year, Vietnam competed in just three disciplines at the Games, including its tank crew, who did not make it past the first round.

Vietnam’s snipers have also advanced to the second round while its combat engineersand military chefs have entered the finals.