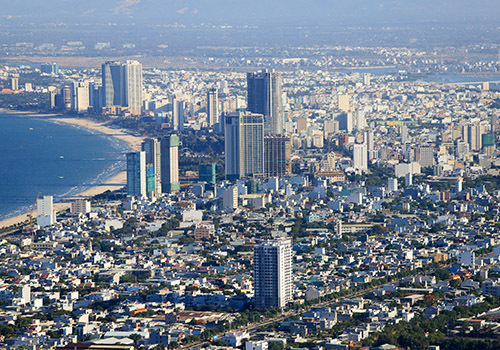 An aerial view of the central city of Da Nang. Photo by VnExpress/Nguyen Dong.

Da Nang should plant more trees and designate more public spaces to make it ‘a city in a garden,’ a city legislator says.

Nguyen Thanh Tien, head of the Urban Department of the Da Nang People’s Council, said on Wednesday that the city has already hired Singaporean consultants to make adjustments to its planning documents.

“The advisors want Da Nang to be a city in a garden. If Da Nang can truly become a park, it would truly become a city worth living in, I hope,” he said.

But its tree density is not high enough, with only 400 hectares of land reserved to plant trees as of last year. With a population of about 1.2 million, this indicates that the city only reserves four square meters of land for trees per person, which is lower than the standard of six square meters set by the Ministry of Construction.

Multiple parking slot projects have stayed on paper, despite the city having over 77,000 cars and 880,000 motorbikes, said To Van Hung, former head of the Urban Development of the Da Nang People’s Council. This is why traffic jams happen in the city and why adjustments have to be made to Da Nang’s urbanization plans, he said.

Da Nang should reserve more of its land for public spaces and for medical and educational purposes, said Cao Xuan Thang, also a member of the city’s People’s Council.

In February, Da Nang authorities had announced plans to hire two Singaporean companies to make adjustments to its growth plans.

The city also said it would spend VND2 trillion ($86 million) on becoming a smart city by 2030, including the construction of a center for operational monitoring and the launching of smart public services.