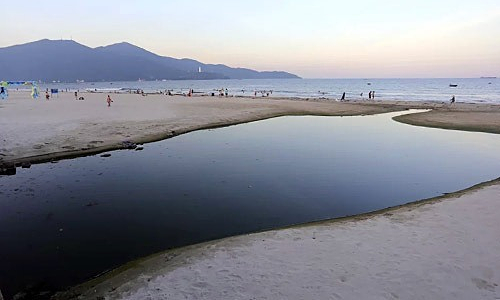 Wastewater flows out to a beach in Son Tra District, Da Nang after a heavy rain in 2019. Photo by VnExpress/Nguyen Dong.

The central city of Da Nang will invest VND1.45 trillion ($62.3 million) on improving the water environment in Son Tra District.

The water environment improvement project, focused on the eastern part of Son Tra District, will include the construction of a sewage system to collect wastewater and rainwater, and preventing rainwater from overflowing into the city’s beaches.

The sewage system, made of concrete and steel, will have two sections: one running along Hoang Sa Street and the other along Vo Nguyen Giap Street. It will help eliminate the smell of wastewater and keep the environment clean, and will therefore be conducive to tourism growth, city officials said.

The city will also upgrade its Son Tra Wastewater Treatment Facility and six coastal floodgates along Hoang Sa and Vo Nguyen Giap as part of the project to prevent seawater and sand from infiltrating the sewage system.

Wastewater pouring out to sea when it rains is a common occurrence in Da Nang. When it rains heavily, trash and other pollutants stuck in the city’s sewers are swept out to the sea, making for an ugly sight.

Da Nang, widely considered the third most important city in Vietnam after Hanoi and HCMC, is also a popular travel destination with its scenic beaches. The city received 7.6 million tourists last year, of whom 2.87 million were foreigners, a 23.3 percent year-on-year increase.