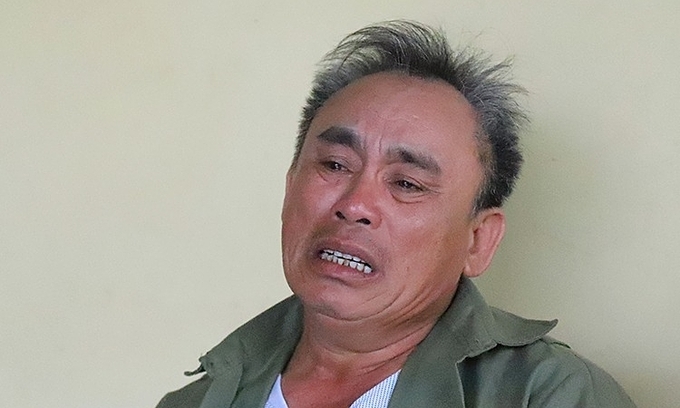 Vo Nhan Que cries at his home in Ha Tinh Province as he talks about a British police’s phone call to confirm that his son was among the 39 victims in the U.K truck disaster, November 2, 2019. Photo by VnExpress/Duc Hung.

He asked them one more time. Was his son Luong one of the victims? He was, the interpreter answered.

Many Ha Tinh families got phone calls from British authorities Friday night. After asking a few questions, they were informed that their child was one of 39 victims killed in the U.K. truck disaster.

Nguyen Dinh Gia of Can Loc District in the central province of Ha Tinh recounted how it happened. He received a phone call from the U.K. and a Vietnamese interpreter said he was sitting with the British police.

The interpreter said that the British police has clarified identities of 39 victims found dead in a refrigerated container truck in Essex County in northeast of London on October 23, and wanted to check some information about his son, 21-year-old Nguyen Dinh Luong, reported missing in the U.K.

After asking about the background, the name and details of his family members, the British police informed Gia that his son Luong was one of 39 dead people. His body is being preserved in the U.K.

“I asked the interpreter one more time whether Luong was the victim or not. They answered, “Correct,” Gia said.

“Later, I asked them when I could bring Luong home.”

After checking with the British police, the Vietnamese interpreter told Gia that this needed more time and may be a long process. He also said that he could not give Gia an exact answer.

Earlier, Gia had reported to local authorities that he had not been able to contact his son since October 23.

After working for a year in France, Luong called his family in mid-October and told them he would go to the U.K.

“Ever since he disappeared, my family considered the possibility that he was most likely gone. But last night, receiving the official announcement, we collapsed.”

Adding to the family’s grief is worry that the cost of bringing Luong’s body home might be beyond their means.

“The family is very helpless. We want to bring our son’s body back to the country as soon as possible. I hope the Vietnamese and British governments agree to offer feasible solutions,” Gia said.

Pham Van Thin of Nghen Town in Can Loc District also confirmed he was called by a Vietnamese interpreter from the U.K., saying his daughter Pham Thi Tra My, reported missing in the U.K., might be one of 39 victims.

“They were afraid we would be shocked, so they said, ‘likely’,” Thin said.

In fact, the family had to insist that it must be My.

“I asked them how much it would cost to take her body home, and how long it would take, but the British police refused to answer,” Thin said.

Thin said the family had already set up an altar and burnt incense for My.

Around 10km from Thin’s house is the family of Vo Nhan Que, whose son Vo Nhan Du has also been reported missing in the U.K. Que received a call from the British police, too, informing him that Du had died in the container truck.

“Everyone was shocked, depressed and confused now,” he said.

A local broker promised to take his son to the U.K. for VND800 million ($34,444). In June, Du flew to Germany for 15 days, then left for France, where he stayed for three months. On October 22, he called home and said he was preparing to leave for England, but then they lost contact with him.

On October 23, U.K. emergency services discovered the bodies of 38 adults and one teenager, suspected immigrants, in a refrigerated container truck at the Waterglade Industrial Park in Grays, Essex County, east of London.

After first voicing a suspicion that the 39 people were Chinese nationals, British police are now saying they are Vietnamese.

“At this time, we believe the victims are Vietnamese nationals, and we are in contact with the Vietnamese government. We are in direct contact with a number of families in Vietnam and the U.K., and we believe we have identified families for some of the victims whose journey ended in tragedy on our shores,” Essex police’s assistant chief Tim Smith, who is in overall charge of the investigation into the case, said in a statement released early Saturday morning (Hanoi time).

So far, 10 families in Ha Tinh have reported their loved ones were missing in the U.K.

19 other families in the nearby Nghe An and Thua Thien-Hue provinces have also reported their children missing the U.K., fearing the worst.

She said Vietnam strongly condemns human trafficking, considers it a serious crime and believes that all culprits must be punished strictly.

Vietnamese Ambassador to the U.K., Tran Ngoc An, said that despite being mentally prepared for the worst possibility, he was “shocked and deeply saddened” by the official information.

On Friday, police in Vietnam’s central province of Ha Tinh said they have arrested two persons in connection with the tragedy. They said their questioning of several individuals indicates that they were also involved other trafficking incidents that have occurred over the past few years.

Some 70 percent of Vietnamese trafficking cases in the U.K. between 2009 and 2016 were linked to labor exploitation, with young people forced to work in cannabis production and nail salons, according to a British government report released in 2018.

Ha Tinh and Nghe An provinces in central Vietnam have long been a source of illegal migration to Britain for people seeking better lives. Migrants often work in nail bars or cannabis farms, heavily indebted and vulnerable to exploitation.

In the first eight months of this year, 41,790 people left Ha Tinh looking for work elsewhere, including overseas, according to official figures.