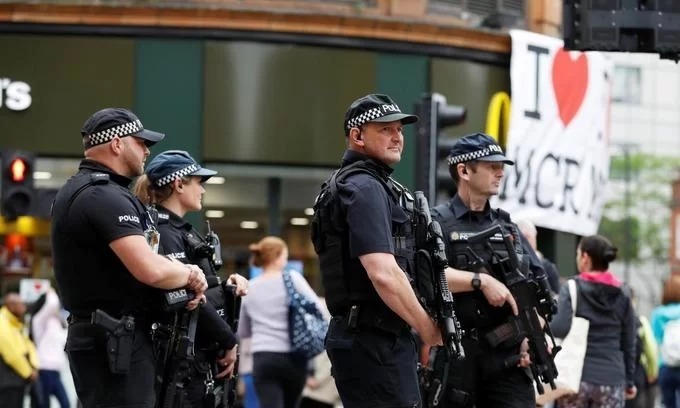 Armed police officers stand on duty in central U.K. in a file photo by Reuters.

A suspect detained in connection with the disappearance of a Vietnamese teen girl in U.K. was brought to court Monday.

The 25-year-old man, whose name and nationality have not been revealed due to privacy provisions under the British law, was one of eight people detained initially in connection with the Tuesday disappearance of 15-year-old Le Thi Dieu Linh.

The other seven were let go after questioning, a communications officer for the North Yorkshier Police told VnExpress.

While the suspect has been accused of assisting violations of immigration law, the communication officer also said on Monday that the police are yet to verify whether the Vietnamese teen girl fleed or not. “She is still considered missing and the police are still looking for her.”

North Yorkshire police have said Linh was last seen with an Asian man aged about 20 on Coney Street near a bus station in the afternoon around the time she went missing.

Linh was wearing a white jacket, light blue denim shorts and carrying a white rucksack while the man was dressed in a dark top and a black baseball-style cap.

Tour guide Nguyen Ba Thanh Tung of Ho Chi Minh City-based travel company Travel Plus came to the embassy to report the case two days after it happened, Vietnamese embassy officials said. He had also reported the disappearance to the local police.

After questioning Tung, North Yorkshire police let him go, and he returned to Vietnam on Saturday.

Linh speaks no English, police said, adding that they are “increasingly concerned” for her safety and believe she “could be anywhere in the country,” the BBC reported.

Vietnam’s Foreign Ministry has instructed the embassy in London to keep related agencies in touch and prepare to implement necessary citizen protection measures.

Linh’s family in Vietnam has been informed of her disappearance, the ministry said.

The U.K. is a major destination for Vietnamese human trafficking victims, with at least 3,187 Vietnamese victims identified since 2009 until recently.

About 362 possible child victims from Vietnam were discovered in England in 2017, up more than a third over 2016.

Victims trafficked from Vietnam most commonly end up being exploited, often in cannabis farms and nail bars, but many are also sexually exploited, according to a report commissioned by Britain’s Independent Anti-Slavery Commissioner Kevin Hyland.