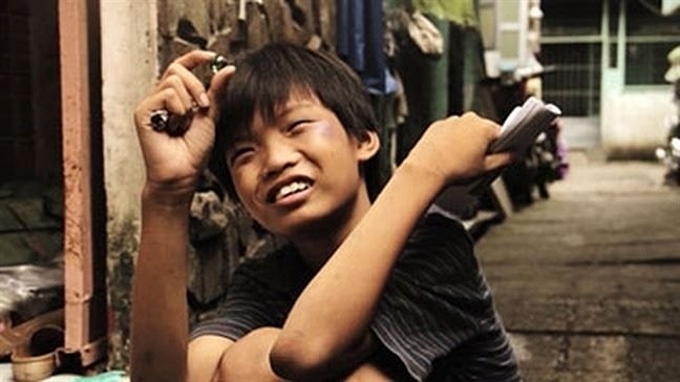 A still from the movie “Rom”. Photo courtesy of Tran Dung Thanh Huy.

Vietnam’s “Rom” and an Iraq-Qatar co-production “Haifa Street” shared the top prize in the New Currents category at the Busan International Film Festival.

The triumph of “Rom” at Busan has come as a surprise because the movie’s producers had previously written to the Busan festival organizers asking that it be withdrawn after Vietnamese cinema authorities said it had not been certified by the local censor board.

However, the organizing board of the film festival decided to screen the movie.

Developed from the critically acclaimed short film “4:30 p.m.”, which was screened at the Cannes Film Festival in 2013, the movie is about a teenage boy named Rom who lives in a slum in Saigon and sells lottery tickets for people in the neighborhood. His aim is to collect enough money to find his parents, who had abandoned him as a child.

Directed by Tran Dung Thanh Huy, “Rom“ is the first Vietnamese entry to receive the New Currents Award, which is given to the two best feature films selected from the first or second works of new Asian directors introduced in the category.

“Haifa Street”, the other winner of the prize, was praised as “a mature, grown up movie” made by a director that “exhibited a confidence and understanding of cinema language which sets the film apart.”

The Busan International Film Festival (BIFF), held October 3-10 this year, is one of the most significant film festivals in Asia. This year, organizers said they had screened 299 films, of which 118 were world premieres, from 85 countries and territories. The screenings were watched by more than 189,000 people.